MUSIC, THE MUSE & ONE TRUE SENTENCE

I write fiction to music...always have.

Of course that's not particularly unusual in itself. Was a time I did what a number of authors tend to do: create a kind of soundtrack or mix for a book, then listen to that self-generated tape or CD while drafting a novel. George Pelecanos, Michael Connelly and John Connolly, among others, have actually bound such discs into their books, or released them in tandem with advance readers copies of their resulting novels.

Others post their playlists for particular novels on their Web sites.

My own tendency has been to microfocus on a single artist, or album. Sometimes, even a single song. Then I weave the music, song titles, lyrics or even the performers (albeit in fictionalized guise) into the novels the music helped to inspire.

HEAD GAMES was dedicated to Tom Russell and Andrew Hardin because the character Hector Lassiter was inspired by Tom Russell's cover of "Tramps & Hawkers," an old Celtic air given a Tex-Mex spin by songwriter Jim Ringer. That song, essentially, inspired not just Hector, but the short story "The Last Interview," that introduced Hector. Here, the Jim Ringer spin on the old Scottish tune is performed by folk singer Todd Crowley:

When it came time to write HEAD GAMES, I pretty much wrote the novel to a steady diet of selected Tom Russell's albums: THE ROSE OF THE SAN JOAQUIN, BORDERLAND, SONGS OF THE WEST, HOTWALKER and INDIANS COWBOYS HORSES DOGS. The title track of the latter, "Tonight We Ride," is essentially a perfect candidate for a HEAD GAMES theme song.

The other primary disc played throughout the composition of HEAD GAMES was Andrew Hardin's BLUE ACOUSTIC. Hear some here.

The second novel, TOROS & TORSOS, was written to a string of oldies which are named, song for song, throughout the book: Jo Stafford, Billie Holliday...it goes on. But there was a particular song I listened to over and over — so much so that I essentially trashed the CD. That tune was Bryan Ferry's cover of the torch song, "Where or When." The lyrics of the song, essentially, summarize the central plot element of that novel:

PRINT THE LEGEND was a different beast. If HEAD GAMES was informed by Americana music, and TOROS & TORSOS by standards and torch songs, PRINT was conceived to be more operatic...written to a battery of classical compositions for violin, mostly performed by Lara St. John.

LASSITER #4, due out in Winter of 2011, is entitled ONE TRUE SENTENCE.

I wrote this one immediately after finishing TOROS & TORSOS, and conceived it as a kind of companion book. Where TOROS sprawled across space and time (Key West in 1935, Spain in '37, Hollywood in 1947 and Cuba in 1959), ONE TRUE SENTENCE is confined to one week in Paris in February, 1924. Think A MOVEABLE FEAST re-imagined as a noir love story.

It's the last novel in which Ernest Hemingway figures. Again, as in TOROS, Hem is functioning as Hector's sidekick. ONE TRUE SENTENCE effectively completes the Hemingway trilogy that informs the opening movements of the Lassiter series. After OTS, it is a Hemingway-free zone.

Because the novel is centered around the Lost Generation — a generation shaped by an infatuation with the void and living oft-times hedonistic lives with no eye to consequences — I found myself drawn to a particular album while writing the novel. I listened exclusively to that album in the winter months I spent writing the first draft of OTS.

That album is by singer-songwriter Melissa McClelland, and is entitled THUMBELINA'S ONE NIGHT STAND. It's a smart, seductive, engaging collection of songs...informed by suicide. And, if, like HEAD GAMES before it, ONE TRUE SENTENCE has a "theme song," it's this tune from Melissa's album:

If you want to sample a little Melissa in a decidedly noir vein, try this one from THUMBELINA:

So, a question for those writers among you:

Do you write to music? If so, who are your musical muses?
Posted by Craig McDonald at 5:34 PM 8 comments: 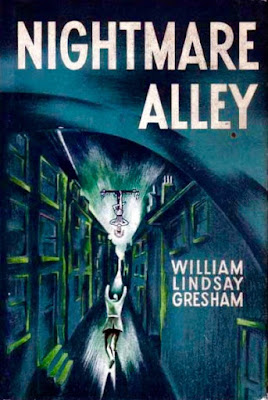 My own "discovery" of this noir classic came about 1985 with an obscure paperback version I picked up partly because of the strange, duotone cover that graced the book — an image I'd later learn was taken from the poster for an eventual movie adaptation of the novel that starred a dubiously-cast Tyrone Power.

This Tuesday, NIGHTMARE ALLEY will be available in a new edition that includes an introduction by Nick Tosches.

A year ago last month, I wrote an essay on ALLEY, and its very haunted author, for Crimespree Magazine to mark what would have been Gresham's 100th birthday. 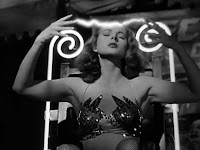 It’s one of my favorite crime novels.

It’s the only transcendent piece of writing its author ever got down on paper.

But how many writers get even a single masterpiece?

Here’s a noir life for you:

This summer marks the 100th Anniversary of the birth of William Lindsay Gresham.

Like Cornell Woolrich, David Goodis and a few doomed others, Gresham was never going to be a centenarian.

He was born in Baltimore on Aug. 20, 1909. His family fled Maryland for New York. There Bill found the Coney Island sideshow and his eventual writerly milieu. He later wrote: “Coney Island, before the First World War, was a raucous, blaring playground… Here, for the first time, I saw women with painted mouths on the streets in broad daylight… At the island, the cops were well taken care of; the joint was running wide open. And to me, even under the handicap of a starched Buster Brown collar, a day at Coney Island was paradise.”

But Bill would be a while getting to write about all that. Like Chandler, like Ian Fleming, he was a late-blooming novelist and would be nearly 40 before publishing his one great book.

First he bummed around; Greenwich Village busker…Spanish Civil War medic…TB ward habitué and a failed suicide (a botched attempt at hanging himself).

In ’39, he got work in the pulp magazine combines. He married poet Joy Davidman, his second wife, and had a couple of kids. It wasn’t a happy or lasting union; Joy eventually lighted out from her alcoholic husband, running to writer C.S. Lewis (an affair dramatized in Shadowlands.)

In 1946, casting back to his longstanding fascination with the midway, Gresham wrote the classic carnival noir Nightmare Alley. It made him fleetingly rich.

The novel tells the story of smalltime grifter Stan Carlisle and his rise from tent show mentalist to A-list attraction — the kind of pitiless ascent required to set up a terminal-velocity crash-dive to the deepest depths of the pit.

It opens: “Stan Carlisle stood well back from the entrance of the canvas enclosure, under the blaze of a naked light bulb, and watched the geek.”

Twenty-two chapters later, we’re in another sideshow tent; in the novel’s closing paragraph, we’re again confronted with a chicken-head biting geek. Between those two paragraphs dwells one of the blackest noirs.

A year after its publication, Tyrone Power, looking for a meaty role for himself, optioned and filmed the novel. Bowdlerized as the 1947 production is, that version of Nightmare Alley stands as a twisted and powerful piece of film noir.

But Gresham, the author, had already peaked. In ’49, he published his only other novel, Limbo Tower, a less than pulpy misfire set in a TB clinic.

In 1954, Gresham cobbled together articles written for a batch of slick magazines and constructed a nonfiction meditation on the carnival he called Monster Midway, effectively establishing himself as the poet laureate of the mitt camps, flat stores and alibi joints.

The book’s jacket flap bio makes Gresham sound like a bonhomie guy gushing joie de vivre: “He is an expert knife thrower, magician, ‘mind reader’ and has tried his hand at fire-eating.”

The dust jacket photo doesn’t embody that man: it depicts a big-eared, ferret-faced man who looks older than his years. He’s got a pencil-thin moustache, slitted eyes and he’s wearing a trench coat and fedora. His smile is pained; there’s a faint overlay of derision there, too. His marriage will soon fail; Bill will move on to his ex-wife’s first-cousin…eventually join AA and slide into spiritualism.

He’s still pining for the carnival. He closes Monster Midway with a letter from a carny friend trying to lure Bill out onto the road: “I got a swell-break this spring, a seal boy…He’s a real good seal-boy, no legs, only stumps of feet and hands coming out of his shoulders. He can shave himself fine… If you can ever pry yourself loose from that typewriter of yours why don’t you wire me and hop a plane out here? Why don’t you give in, kid, and admit it? You’re a carny at heart.”

Bill didn’t run away with that circus.

He delved into nonfiction again in ’57 — a fairly dispensable biography on Houdini written with the assistance of magician and professional debunker James Randi.

Gresham’s last piece of published writing was a book on body-building.

Bill was on his way down — a doom-laden spiral to rival the one he fashioned for “Stanton the Great” Carlisle in that one brilliant novel.

It’s 1962: Bill’s vision is fading. The former fire-eater is diagnosed with cancer of the tongue. It’s less than 20 years since his best-selling debut novel hit stands.

In September ’62, he checks into the Dixie Hotel that he had haunted while writing Nightmare Alley. He registered under the name, “Asa Kimball, of Baltimore.” He’s 53, on a suicide run and this time he means to get it right.

September 14 he succeeds — felled by a fistful of sleeping pills.

In Monster Midway, Gresham opens a chapter with the suicide of a magician famed for his bullet-catching trick. Change a few details, and the vignette could stand as Gresham’s own death notice:

“Showman and recluse, genius and brooding adolescent, solitary drinker and mystifier of crowds, (he) had given up the battle with the dragons of his own mind. He left behind him an odd assortment of friends, few of whom knew each other, for he kept his social circles from overlapping.”

They say Bill’s death didn’t get much attention…largely unnoticed by the press other than a bridge columnist.

Chances are, the centenary of his birth will also go largely unremarked upon.

But he had that one great novel. That’s something…