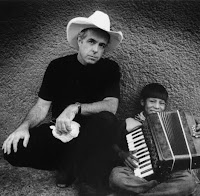 This year finds me briefly veering back over to the nonfiction side of the publishing world with Rogue Males: Conversations & Confrontations About the Writing Life, a second collection of interviews with authors including James Ellroy, Pete Dexter, Daniel Woodrell, Elmore Leonard and the late, great James Crumley. Rogue Males also features an account of a trip to the desert to interview crime fiction greats Ken Bruen and James Sallis about the craft of writing.

Rogue Males is published by Bleak House in two simultaneous editions: a durable hardcover edition, and a trade paperback edition.

Over the next few weeks, I’ll be giving a little background about each writer featured in Rogue Males. We kick it off with singer/songwriter Tom Russell, who on face might seem a curious interview subject for a book dominated by crime novelists.

In fact, Tom Russell is probably the only singer/songwriter with a degree in criminology. His song catalogue also contains a number of crime inflected compositions including the James Ellroyesque “Tijuana Bible,” a tribute to Texas über defense attorney Richard “Racehorse” Haynes and his Orson Welles-inspired, Borderland masterpiece “Touch of Evil,” among many, many others. (I actually dedicated my debut novel, Head Games, to Mr. Russell, because the book was written to a steady soundtrack of his music.)

Russell also penned his own crime novel, although the work has only appeared in Norwegian translation.

To get a sense of Russell the prose writer, check out his Borderland blog. If you haven’t sampled his music, his recent posting to YouTube of a new song, “Guadalupe,” is a pretty sublime place to start.

Tom Russell interview excerpt: “In this culture, I’d hate to be an insider. I’d be playing 18 holes of golf a day and listening to country music. This other crap. A fear-driven culture. If they call me an outsider, that’s fine because it leaves me alone to do whatever I feel like, really.”

NEXT UP: JAMES CRUMLEY
Posted by Craig McDonald at 3:15 PM