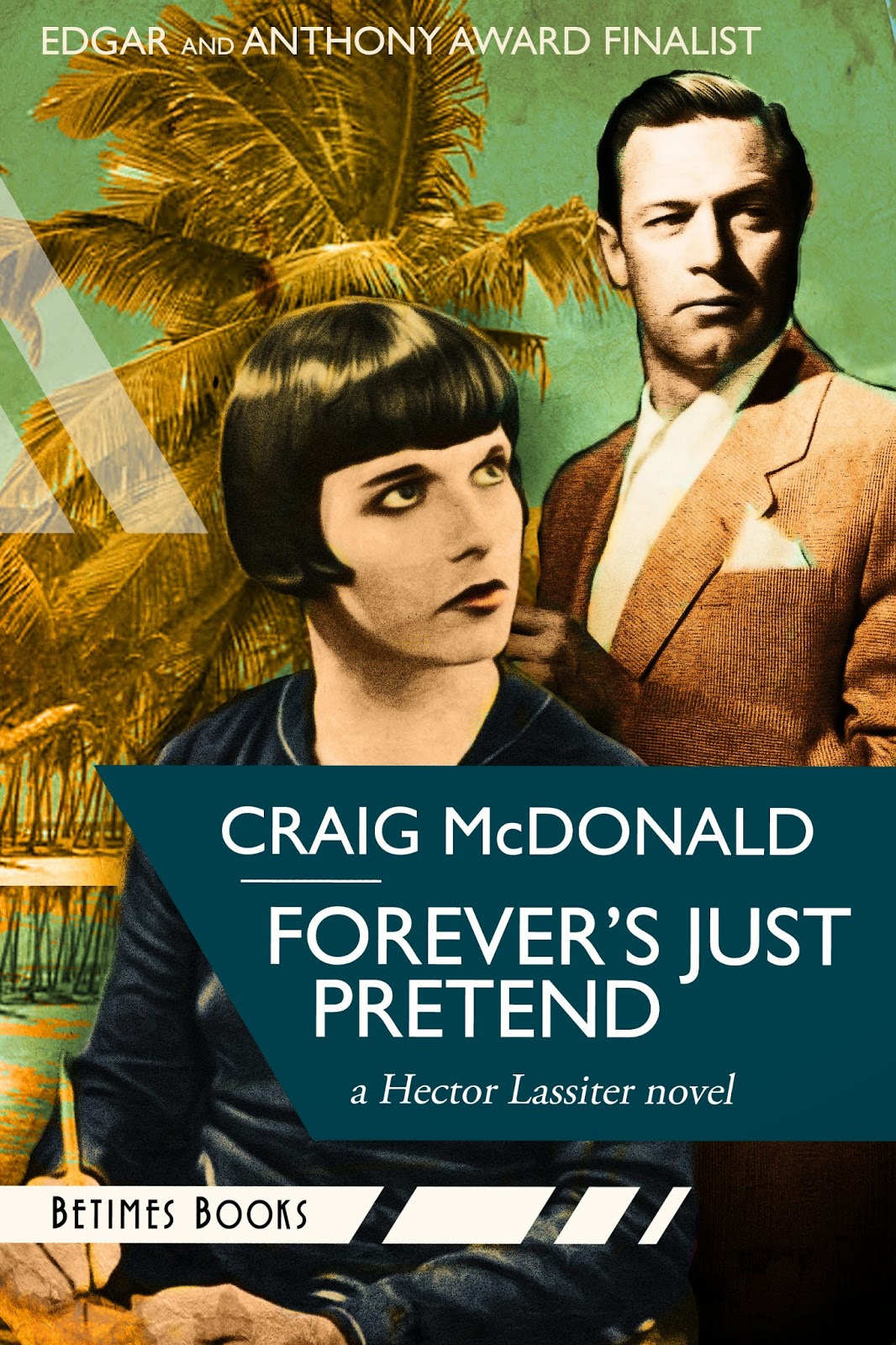 
As announced earlier, the entire Hector Lassiter series is returning this summer/fall with a mix of old and new novels, repackaged and reimagined with new covers and additional content.

This is the cover for FOREVER'S JUST PRETEND, designed by JT Lindroos and marking the first new Hector Lassiter novel to appear in something over three years. (The book will be available in ebook and trade paperback format in just a few weeks.)

FOREVER'S JUST PRETEND is set very early in Hector's life and follows right off the end of ONE TRUE SENTENCE (to be released simultaneously with FJP).

The new novel continues a story started in the Paris-set OTS: The torchy and lusty love affair between Hector and fellow crime novelist and fetchingly hedonistic bon vivant Brinke Devlin.

Set over a series of holidays in 1925 Key West, the novel incorporates some geographically-shifted, but all-too-real 1925 crimes involving arson and murder.

The novel also gives you a Lassiter relative in the person of Hector's paternal grandfather, the man who essentially raised an orphaned Hector and who, along with Brinke, shaped the novelist/screenwriter into the man we come to know in the later Lassiter novels.

So along with the cover, here's a teaser for the new novel and a book trailer...


FOREVER’S JUST PRETEND
By Craig McDonald
Key West, 1925—the southernmost point and most un-American of American locales. A rowdy border town surrounded by water and populated by sports fishermen, navy veterans and Cuban revolutionists. Misfits and mavericks, all.
After several years in Paris, novelist Hector Lassiter returns to the United States and arrives on “Bone Key” to reunite with his lost love Brinke Devlin (introduced in One True Sentence), a fellow author and the woman destined to become the first Mrs. Lassiter.
Hector finds an island under siege, wracked by fatal fires and savage attacks against islanders the local press attributes to a baseball bat-wielding fiend dubbed “The Key West Clubber.”
When one of the Clubber’s murders hits too close to home—literally next-door to the Lassiters’ love nest—the newlyweds begin to poke around the crimes. What they find casts doubt on the possibility of a single culprit, pointing instead to a vast and far-reaching criminal conspiracy.
By turns sexy, sly and seductively sinister, Forever’s Just Pretend barrels along at a page-turning pace to a shattering conclusion that sheds new light on the origins of the internationally and critically acclaimed character Hector Lassiter and his larger-than-life legend.
Drawing on dark historical events and rich in atmosphere and character, Forever’s Just Pretend will thrill readers of the series BookPage has called “wildly inventive” and The Chicago Tribune calls “most unusual, and readable crime fiction to come along in years.”