COWBOY'D ALL TO HELL; CANCION MIXTECA 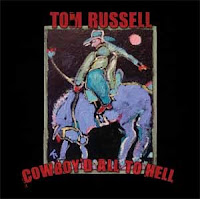 As noted in a post earlier in the week, HEAD GAMES, the first Hector Lassiter novel, was partly dedicated to singer/songwriter Tom Russell whose music inspired and informed not just the character of Lassiter, but some of the plot moves of that first book in the Lassiter series.

One song, in particular, runs like a thread through HEAD GAMES — a Mexican folk-song that was not penned by Tom Russell. Yet Tom Russell introduced me to that song.

It's called "Cancion Mixteca." As HEAD GAMES unfolds, Hector becomes increasingly focused on that tune...it becomes a kind of refrain and theme song for the book, and Hector, circa 1957.

We'll get back to that particular piece of folk music...close the circle in due time.

Tom Russell has a new album out. It's called COWBOY'D ALL TO HELL.

It's a partial re-release of Russell's album COWBOY REAL (Philo 1991). Eight of that vintage album's 11 tunes are re-presented in re-mastered form.

From there, the album pushes out with some new recordings of cowboy tunes that graced Russell's SONGS OF THE WEST, as well as INDIANS COWBOYS HORSES DOGS and THE MAN FROM GOD KNOWS WHERE — all of the tunes re-recorded and peppered with asides and some occasional historical notes about the songs' origins. It's a great, casually assured collection of cowboy songs that are raw and real — never sentimental.

The collection closes with a new recording of the song "The Rose of the San Joaquin," a tune Russell penned with Ian Tyson "one dusty afternoon down in the California desert," according to Russell's on-album aside. When I let myself fantasize about a HEAD GAMES film adaptation, that movie opens with Tom Russell's "Tonight We Ride," and closes with a gunshot and then an over-the-credits rendition of "Rose of the San Joaquin."

At the end of the COWBOY'D ALL TO HELL version of "Rose," Tom disarmingly segues into a raw and wrenching version of "Cancion Mixteca."

As I said, I first heard the song at a Russell concert in Columbus, Ohio many years ago. I looked it up later and found a version of the song by Harry Dean Stanton that appeared in the film PARIS, TEXAS.

To close out, perhaps my new favorite Tom Russell borderland ballad, sung by its composer (You can find this one on Russell's BLOOD AND CANDLE SMOKE:

It dawned on me while preparing a Web site update for my official page, that in the haze of the PRINT THE LEGEND tour, I never got around to posting here the two-part interview that the terrific Keith Rawson pulled together during my rainy sortie into Arizona during March.

A lot of ground is covered: Not just stuff about my series and continuing character, but discussion of the state of genre fiction, the dangers of series characters and the like... And, ahem, that Kindle matter.