Various book events have taken me north and south across North America, from Quebec to Galveston, and east and west from New York City to Arizona.

I’ve even had the privilege of taking the show on the road as far away as Paris and Lyon.

But there was something very special about this month’s trip to Dublin to discuss and read from Head Games on the eve of its 10th anniversary and looming adaptation as a graphic novel (coming autumn 2017 from First Second Books).

There’s also its rich literary history, from W.B. Yeats to Oscar Wilde to Bram Stoker to Jonathan Swift and, of course, James Joyce.

With several days bookending the Aug. 3 reading, I was able to take in not just much of Dublin’s sights and history, but some of the surrounding villages and less developed areas.

The Martello tower in Sandycove where James Joyce once briefly slept and which features in the opening pages of Ulysses is open to the public as a Joyce exhibit.

You can climb the narrow staircase that leads to the room where Joyce and roommate Oliver St. John Gogarty (“Buck Mulligan” in the novel) slept and lived for approximately six days.

(Arrangements quickly fell apart, Gogarty is said to have said, after some midnight incident involving a loaded revolver.)
If you’re particularly brave (at six-two and being fairly wide-shouldered, I found it wickedly claustrophobic), you can even scale the dark and narrow spiral staircase up top to look off the top of the tower where soldiers once stood watch for some never-to-come Napoleonic invasion.

My take-away from that slightly uncomfortable climb was renewed respect for Joyce:

It’s amazing someone with his drinking proclivities and poor eyesight could have navigated those winding, narrow-tread stairs up and down without breaking his neck.

At Dalkey Island (“Thorny Island”), near Dún Laoghaire and Bulloch harbours, we got up close and personal with some lazing seals and jellyfish before stepping foot onto the remarkably spongy, rabbit-overrun island now home to the relics of a church and another Martello tower.
(There’s some evidence it was also used as a base by Vikings.) Now the island’s only inhabitants are all of those rabbits and a few goats.

Appropriately, as a crime novelist, I also got a glimpse of Montpelier Hill, home of the Hell Fire Club (or Club Thine Ilfrinn) which has gotten a mention in a novel or two of mine.

I also got to have   some coffee in Jack Whites while waiting out a rainstorm after a visit to a windswept beach that was knocking the hell out of overhead crows and gulls.

That inn was the site of a rather infamous murder and resulting court case several decades ago, but still well-remembered by the locals.

The victim's wife solicited myriad potential candidates to kill her husband with little success. ("If you want a job done...")

From a sense of obligation, I did make a point of seeking out The Temple Bar in the more touristy section of Dublin and having a pint of Guinness there toward visit’s end.

This particular bar was the setting of my first published short story, Rope-A-Dope (Dublin Noir, Akashic Books, and edited by Galway's own Ken Bruen).

In that story, a monstrous lothario with designs about dropping a date rape drug in a woman’s drink selects the perfect wrong Celtic woman to victimize.

And then, at last, there was the book event that Wednesday night, in an old, multi-storied Dublin pub, where we did our best to recreate a borderlands cantina atmosphere for the Head Games reading. 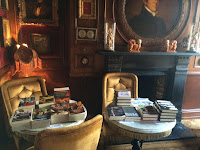 Special thanks to all those who attended the Aug. 3 event in the old and posh surroundings of Peruke & Periwig on Dawson Street in downtown Dublin.

The audience and literary bloggers in attendance were a joy to pass the time with.

Very special thanks also to my Dublin-based publisher, Betimes Books, for making it all happen.

I hope all of our paths will cross again, soon.

Posted by Craig McDonald at 5:50 PM No comments: