This October will finally see the release of the graphic novel of Head Games, a project about a decade in the making.

It all took a big step closer to reality this past week with the finalizing of proofs for the forthcoming graphic novel, and the release of fall release catalogues by its publisher, First Second Books that includes several sample pages from the opening of the new book. 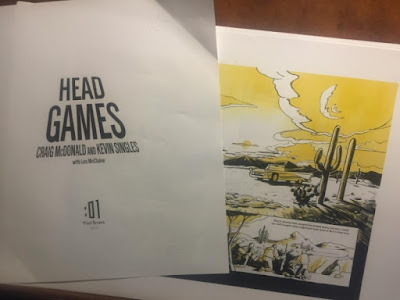 In answer to questions about this new version of Head Games, and what role I had in its preparation, for those fairly new to the topic, shortly before the publication of Head Games, the novel in 2007, we sold graphic novel adaptation rights to First Second, then a fairly new start up that has since grown into an industry leader and multi-Eisner Award-winning graphic novel imprint. 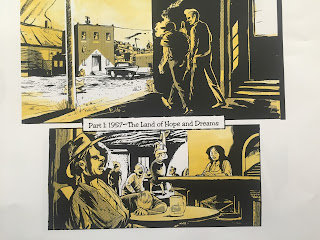 I was asked to write a few sample pages of a script to see how the book might adapt to the visual format. I fully expected the actual script to be turned over to somebody else. But following the sample’s review, I was asked to do the full adaptation of my novel.

Flash forward to February 2017: The art and words are all locked in now, and on October 24, the novel will be published in a striking two-color presentation, a concept I pitched back in the early days of this project. 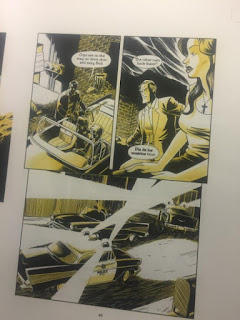 Watch this space in the weeks ahead for more about the new book, and where I might be turning up in support of this one.

It’s a very slick looking piece of work I’m especially excited to see go out into the world:

"It’s 1957, and aging novelist Hector Lassiter thought that his adventures were long behind him. But then he receives a treasure worth killing for: the skull of Mexican revolutionary Pancho Villa.
"With his partners in crime, brooding poet Bud Fiske and hard-as-nails beauty Alicia Vicente, Hector must make a mad dash across the American southwest. If the trio can survive long enough to sell the skull to the highest bidder, they'll score big. But in the meantime, Hector must dodge bullets from deranged fraternity members, aging soldiers of fortune, vicious warlords, and crooked feds.
"In this graphic novel adaptation of the Edgar-nominated novel Head Games, Craig McDonald blends history and legend to tell the tale of the classic hard-drinking, hard-living, and hard-boiled protagonist. Artist Kevin Singles brings this noir thriller to life with a style reminiscent of the golden age of dime-store paperbacks." 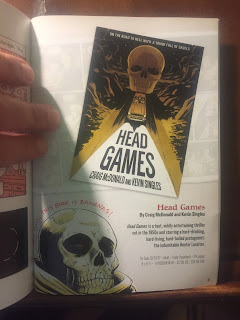 Posted by Craig McDonald at 2:59 PM No comments: