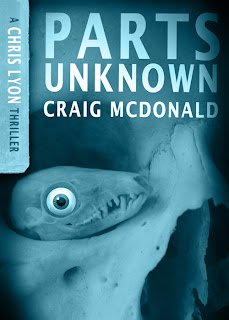 PARTS UNKNOWN is my new eBook kicking off a series of thrillers featuring a writer named Chris Lyon. The novel is available for Kindle and Nook.

The Lyon series is vintage pulp-noir, to my mind; stuff from my until-now private reserve. There have been tastings, to be sure: Chris crops up at the end of my 2010 novel, PRINT THE LEGEND. He appears a couple of times in my 2011 standalone, EL GAVILAN.

PARTS UKNOWN is the first sampling of the wider Lyon vineyard.

Some literary critics would have you believe authors have only a single book in them. They even have a term for this concept: “urtext.”

Urtext, in a nutshell, means, “the original text.” To put it another way, in a literary sense, it’s the “first text,” or axis around which a novelist’s fictional world rotates. Writers evolve; hopefully they gain skills over time.

But in the end, their core remains the same, urtext proponents would have you believe. The English Lit student in me grudgingly buys into the notion that if you look back at the first complete novel from any given writer’s hand, you’ll uncover the seeds of much, if not all that follows. Look at a mature writer’s juvenilia, and you will, in theory, see from where the seasoned stuff springs.

In 1989, I completed my first crime novel, PARTS UNKNOWN. The book was “inspired,” if that’s the right word, by a real series of mutilation murders committed in Ohio between the 1930 and perhaps extending into the 1970s or beyond.

I’d tried my hand at writing literary novels throughout the 1980s. At age nine, I tried to write a mystery novel about a guy named Chris Lyon.

Sometime around 1990, I read and was riveted by James Ellroy’s THE BIG NOWHERE. It was that Ellroy novel that reminded me genre fiction could rise to the level of literature. The Ellroy novel directly inspired me to go back and try to write a genre novel of my own. A then newish nonfiction book about these old Cleveland crimes inspired the plot of my first crime novel.

The Cleveland Torso Slayer and I go back. Growing up, I spent a lot of time with my maternal grandparents. Here and there, my grandmother used to tell stories about this killer who stalked Cleveland during the Depression. She would tell little six- or seven-year-old me tales about the family car breaking down in Cleveland during the Depression-era murder spree. In the most recurring version, scared and alone, she went off in search of my granddad who had, in turn, gone in search of a mechanic.

At some point, she met a stranger she remained convinced was the killer. My grandmother was unabashedly given to melodrama. She was an aspiring poetess and mystery fiction fan who bought me a subscription to Ellery Queen Mystery Magazine when I was a kid. I still have every copy she got for me, though I never read a single issue of the magazine that I regarded, even at age 10, as neutered and tedious. Even then, the thirsty reader in me craved the harder stuff.

Consistent with that juvenile, jaundiced view, I regarded my grandmother’s tales of an Ohio-based decapitation murderer as nonsense.

Flash forward: A downbeat, lonely Christmas Eve in 1989. My widowed grandmother, it was clear to me, was displaying the early intimations of Alzheimer’s. In theory, I was spending time with my family.

But instead of hanging with seldom-seen cousins on that rather depressing Christmas Eve, I bolted. I drove to German Village to a still-standing Indy bookstore open until midnight for last-minute shoppers. I roamed the stacks.

At some point, determined to close the store down, I wandered into the True Crime section. On a whim, I cracked the spine on this newish book called TORSO by Steven Nickel.

In a few seconds, I realized it was an account of the very Cleveland crimes my grandmother had spent so many years talking about.

In various interviews given in 2007 and ’08 regarding my “debut” novel, HEAD GAMES, I went to some lengths to distinguish “first-published novel” from “first novel.”

Few are the writers whose first novel is the first published. Some of us—probably most of us—write many, many books before publication happens through some combination of luck or kismet.

The sad thing is, all those unpublished books that might have been “debut novels” can be pretty strong stuff all on their own.

In all key respects, PARTS UNKNOWN is my first novel. My urtext. When I completed it, I started shopping it around, cockily expecting to find myself a published author sometime in the early- to mid-1990s.

But Chris Lyon faced many of the challenges Hector Lassiter faced years later in getting published. The Lyon books, like the Lassiters, were regarded as something hard to categorize. Hector, in the end, had an advantage Chris didn’t: In the early 1990s, with the exception of books by Daniel Woodrell, Ellroy, James Crumley and James Sallis, nobody was really publishing edgy or envelope-pushing crime novels. The market was saturated with police procedurals, cozies and long-running series short on steam and sparks.

Throughout the 1990s, I kept on stubbornly writing about my central character, Chris Lyon, a journalist-turned-crime novelist who tended to use himself and those around him as characters in his fiction.

I wrote, in fact, an entire series of interconnected books about the character. I kept on writing about Chris and his world because I believed in them. I still believe in Chris Lyon.

Only in retrospect did I come to see he was also a premonition of the character I’m now best known for writing—that of Hector Lassiter.

Hector, in his world, is a screenwriter and crime novelist popularly known as, “the man who lives what he writes and writes what he lives.” Hector debuted in 2007 in HEAD GAMES, an Edgar- and Anthony-award finalist for best “first” novel.

There is a lot of overlap between the Lyon and Lassiter series. I shamelessly plundered the urtext of the Lyon books to populate the Lassiter novels, lifting whole characters and moving them into Lassiter’s mythology.

EBook technology now allows me to pull a William Blake and essentially package and publish the Chris Lyon series myself. Over the next few months, new titles in the Lyon series will appear with some regularity, about one every two or three months, until the series is complete. I won’t put a number to the series. That would, in its way, constitute its own spoiler.

I’ve resisted the urge to greatly revise the Lyon novels for eBook publication. When I wrote them, they were contemporary crime novels. Now they pretty much read as early 1990 historical novels. Cell phones and the Internet were just coming into their own and actually constitute plot points in the first two or three novels.

The novels stand as the pieces I would have started publishing in 1992, or thereabouts, if the fates allowed. If you choose to take the ride, as a side note, you’ll see where nearly everything of Hector Lassiter’s world and attitude springs from—that pesky urtext thing, again.

So that’s the one significant thing I have chosen to do in prepping these books for publication: Rather than revising out some of the things that link the Lyon/Lassiter series, I’ve ramped them up, played to them. The two series entwine as the saga unfolds. At some point, a torch is passed.

In fact, that blending of Chris and Hector’s worlds carries on through the eBook extras in this first Chris Lyon thriller.

Along with PARTS UNKNOWN, in the new eBook you’ll find previews of the next Lyon novel, CARNIVAL NOIR, which introduces Salome (who briefly appears in EL GAVILAN), the key woman in Chris Lyon’s life.

PARTS UNKNOWN, the eBook, also contains a preview of the next Hector Lassiter novel, ROLL THE CREDITS, which features an appearance by Jimmy Hanrahan, a key player in PARTS UNKNOWN and already established as a longtime crony of Hector Lassiter’s (Jimmy, like Chris, crops up in PRINT THE LEGEND, AKA: Lassiter #3). Like some other characters already in print, Hanrahan was first created for my partly Cleveland-set, first crime novel featuring Chris Lyon.

As a last bonus, there is also an interview with James Jessen Badal, author of the two definitive nonfiction books on the Cleveland Torso slayings. That interview was conducted several years after my novel about the Cleveland crimes was written, and so does not have bearing on my book’s plot or content. The interview does, however, give some deep insight into the actual Ohio crimes, as well as the most likely suspect to have committed the murders.
Posted by Craig McDonald at 5:47 PM 1 comment: