(CAUTION: This is a visceral and fast review of SPECTRE after a first viewing. Mild spoilers are likely to happen.)

“Character is plot. Obsession is motivation. The quest, whatever else it may appear to be, is always a search for self—a race against time to a blood-spritzed epiphany. When that light bulb goes on, the world goes dark. No happy endings.”
—TOROS & TORSOS 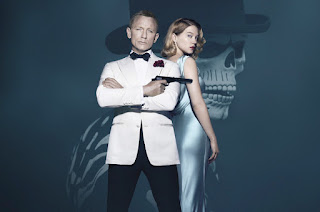 I enjoyed freshman James Bond director Sam Mendes' SKYFALL on first viewing—particularly struck by how beautiful it looked—but wasn't as bowled over as some others seemed to be when it was fresh.

The film grew on me over repeated viewings despite some drop-jaw plot issues and a still problematic third act.

SPECTRE, Mendes' sophomore effort, I actually prefer, but I wonder how much of my enjoyment is fueled by the fact the film feels closer to a movie drawn from the Ian Fleming novels than any of the other 007 films (aside from CASINO ROYALE) since the too-short Timothy Dalton era.

Having loosely monitored reviews of this one, it's my impression European critics have embraced the movie far more ardently than American reviewers, who seem drastically split on SPECTRE's worth.

Given the fact that most current American film critics (such as they are in these sad and vapid times) were probably introduced to Bond via the tepid and lamentable Pierce Brosnan era (tellingly, I saw every Bond film in a theatre from YOU ONLY LIVE TWICE on with the exception of the last two Brosnans), I suppose the character-driven nature of SPECTRE might well test short attention spans.

On the other hand, the action pieces in this film are among the series best.

Maybe it's the fuller haircut, or maybe it's the lighting, but Daniel Craig seems more vital and present in this film than in SKYFALL and seems easily positioned to carry on in the role for another film or two (we'll get to that).

His portrayal of Bond is his most assured and richest for my money, and Craig is now playing Bond as a seasoned veteran rather than the bravado-driven tyro who stormed through the first two films, or the embittered, injured man we followed through SKYFALL.

This is a Bond who knows his demons, embraces his darkness, but still performs with passion and a kind of ironical detachment while facing the dawning realization his life as lived offers no second acts.

The film injects more humor than we've seen since Brosnan left, but it's clever, smart stuff springing from circumstances. Some have said the movie takes a drift back to the whimsy of the Roger Moore era: I didn't find that to be so at all.

Sean Connery once knowingly remarked he tended to leave a tense scene through the humor door while Moore entered through that door. Craig is decidedly in the Connery-vein of humor with this outing. 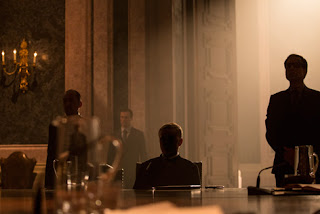 Spectre, at last firmly again in the hands of EON productions for the first time since 1971, is greatly elevated in its 21st Century incarnation—now far more disturbing in its bloody byways and tropes. Its in-person introduction through a classical Spectre "board meeting" held in a lowly-lit and Vatican-like structure in Rome is wonderfully creepy and sinister.

But I get ahead of myself.

For the first time, a Bond film is prefaced with an epigram: "The dead are alive," before we're hurled into a Mexico's Day of the Dead ceremony, the most audacious pre-credits sequence in Bond history.

Indeed, much has been made about Easter eggs, call backs and echoes of earlier 007 films. For the most part, I found all of these homages to be clever and not too attention-getting.

I had the sense that Mendes was endeavoring to perhaps loosely bind all the earlier Spectre-driven films into a kind of revisionist, coherent origin narrative that simultaneously sets up the Spectre we met in those long-a-go Connery films while giving it a contemporary kick forward in our increasingly post 9-11 dystopia.

There's no question this film positively aches to bring us back to that classic Connery era that was already beginning to lose footing about halfway through GOLDFINGER.

For the first time in a Daniel Craig Bond film, we get the traveling dots and gun barrel opening. We also have old and new Aston Martins, white dinner jackets and mocking dialogues with rodents (see DIAMONDS ARE FOREVER) finding their moments.

Lea Seydoux is winning as Dr. Madeleine Swann and the best of Bond's female leads alongside Eva Green's Vesper Lynd, who with so many others hangs like a ghost over this film.

It's been argued by more than a few in recent days SPECTRE feels like a bookend to Craig's tenure as Bond—a valedictory closing. I didn't leave the theatre with that sense, not at all.

Through the whole Sony leaks debacle, it emerged that at least one of those shaping SPECTRE's early vision originally saw this film in two parts.

The ending we got—a kind of happier spin on Gary Cooper's HIGH NOON, in terms of how I appraise it—potentially sets up the possibility of a grim, George Lazenby-like opening credits sequence for Bond 25 (Craig is under contract for that film, unless something derails that plan.)

As SPECTRE headed off into the English sunset, I was left feeling the film still held the structure of a two-chapter vision...and it felt to me like it yearned to end on a cliffhanger.

But then—instinctively—I've long held the belief (from my first viewing of SKYFALL on opening weekend, in fact), that Mendes and Craig were hell-bent on a Nolanesque trilogy, ala Batman.

Given the moving parts in place at the end of SPECTRE—not to mention some very hefty dangling plot threads that would grate if Craig didn't come back—I'm more convinced than ever this isn't the last Daniel Craig Bond, and, quite likely, not the last Mendes' 007, either.

For as much as this film echoes classic cinema Bond, it also mines classic (and mostly untouched) Fleming Bond, too. (Check out that name on the safe house near the end of the film for some real, in-the-weeds Fleming winks.)

Given the rich and still un-mined material in the Fleming novels—chiefly to be found in MOONRAKER, YOU ONLY LIVE TWICE and THE MAN WITH THE GOLDEN GUN—the possibility of even more Fleming-rich Craig Bonds looms if the producers yearn to drift that way.

(On that note, I'd personally love to see Bond 25 and 26 linked and filmed back-to-back, if only to see Craig match Connery and Moore's respective, 7-film streaks.)

Other than the increasingly nagging feeling the film wanted something other than its apparent happy ending, I loved SPECTRE, and found much of it quite sublime.

My only significant disappointment with the film is the one I went in dreading would prove to be right and that was the awfulness of the theme song by Sam Smith.

As I remarked elsewhere earlier—and sadly feel more strongly than ever I was right—putting that "song" in this film was indeed tanamount to keying one's own Aston Martin...a lamentable misstep. (Still far prefer Lana Del Rey's "24".)

But, as Connery's Bond said (in THUNDERBALL, I think), "You can't win them all." 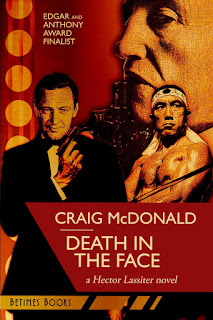 Posted by Craig McDonald at 5:16 PM No comments: