CELEBRATE HALLOWEEN WITH 'THE GREAT PRETENDER'

A good portion of the action of the book unfolds in realtime against the broadcast of Welles' infamous "War of the Worlds" radio adaptation. You can listen to that piece of history here.

The morning-after press conference Welles gave (also depicted in "The Great Pretender") is worth a look, too... 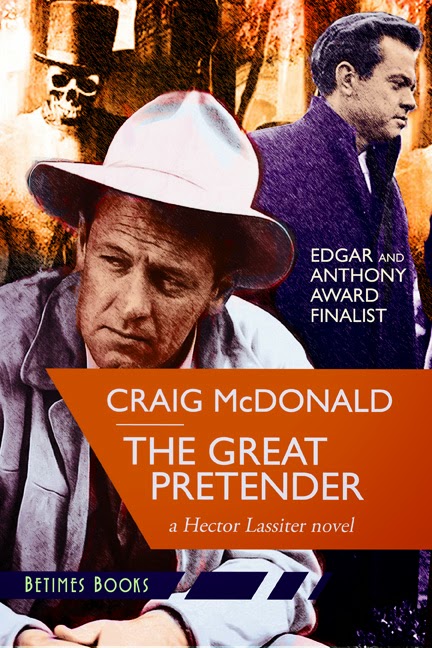 Nazis, black magic and secret history collide in Craig McDonald's "The Great Pretender." In 2007, McDonald launched the Hector Lassiter series with the Edgar Award-nominated debut, "Head Games," pairing the globetrotting, larger-than-life crime novelist with equally legendary filmmaker and amateur magician Orson Welles. "The Great Pretender" fits the capstone on the Lassiter/Welles legend, spanning their decades-long, uneasy association from the run-up to Welles' infamous "War of the Worlds Panic Broadcast of 1938" to the set of the noir classic "The Third Man" and the ruins of post-war Vienna. The novel finds the actor and author in a race for a lost holy relic promising its possessor infinite power but a ghastly death if lost. Hector and Orson's competitors in their quest for the 'Spear of Destiny' or 'Holy Lance' include German occultists, members of the Third Reich, a sensuous Creole Voodoo priestess and a strangely obsessed J. Edgar Hoover.

ROLL THE CREDITS: Paperback/eBook
Posted by Craig McDonald at 7:13 AM No comments: