Today is the anniversary of Pancho Villa's 1916 raid on Columbus, an event central to the plot of my debut novel HEAD GAMES (AKA, Hector Lassiter #1).

HEAD GAMES, in all three of its American formats (softcover, hardcover, and collector's edition, is sold out and effectively out of print in the U.S., though still available in eBook format. The novel will be making its Mexican debut in a few months with a great new cover I'll share soon.)

1916: That was the year Pancho Villa attacked Columbus, New Mexico and triggered the Punitive Expedition.

Like Bin Laden many decades later, Villa proved infuriatingly elusive. Once we lost interest in him, Villa eventually settled down on his ranch, put on some weight, stepped up his womanizing, and started amassing this arsenal. What he meant to do with that latter remains a mystery: Villa was gunned down by parties unknown before he could stir up further revolts or revolutions. A few years later, Pancho's grave was robbed and his head stolen. (Again, all described in HEAD GAMES.) The head remains missing. We'll get back to that, shortly...

Now, I don't consider myself a relic, but I have actually known/met a couple of Punitive Expedition members (both dead for some number of years now). One I met as a child. The other I met as a young reporter...spent an afternoon with him hearing tales of the trail and looking through old photo albums only to be told by the lonely old man he forbid any article be written about him. He just wanted company to pass a summer afternoon. That man, and the other man from my hometown who rode with Pershing, are both name-checked in HEAD GAMES.

According to an article in the Telegraph, he attributed his long life to "love," much walking and an active sex life (he remarried at the age of 99). You can read Vega's story, much of it in his own words, here. An image from Corbis of the old Villista shows a man with some real character etched into his face: 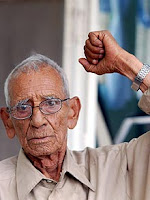 So Vega's gone. And Pancho's head remains elusive. Interestingly enough, the Wall Street Journal this past week took another look at Villa's missing remains (more than just his noggin, really)... Of course, Skull & Bones (the culprits behind Villa's grave-robbing as posited in HEAD GAMES) also got a mention... You can read that piece here.

Posted by Craig McDonald at 7:51 AM No comments: