This week, it debuts in France from Belfond with a new title, RHAPSODIE EN NOIR (translation by Pierre Reignier), which is, in a very meta-twist, the title of Hector Lassiter's own first novel — a novel he will be seen composing in the forthcoming ONE TRUE SENTENCE (coming February 2011, from Minotaur).

Belfond recently released HEAD GAMES in mass market paperback to help promote the launch of TOROS/RHAPSODIE. (Belfond will also be publishing PRINT THE LEGEND and ONE TRUE SENTENCE in translation.)

TOROS was a change up. Hector narrated the first book; TOROS moved to limited third-person point of view and was spread across multiple decades. In the novel, Hector chases a phantom killer inspired by surrealist art. We're on the scene of the devastating 1935 Florida Keys Hurricane with Hector and Hemingway... We're the Spanish Civil War in 1937 where an increasingly erratic Hemingway burns bridges with John Dos Passos and others against a backdrop of an under-siege Madrid... We're in Hollywood in 1947 with Orson Welles and Rita Hayworth, caught in a crossfire from the Black Dahlia murder... And we're in Cuba at the dawn of the Castro regime. 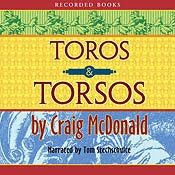 Before such things were on many people's radar, I elected to retain my eBook rights for HEAD GAMES and TOROS. In a few days, I'll be releasing TOROS in eBook format. That version will include samples of the other novels, including a preview of ONE TRUE SENTENCE.

• 2009 Crimespree Award finalist for Best in an Ongoing Series