AT THE BRINKE: ONE TRUE SENTENCE

Monday evening should bring a fairly sweeping Web site update, complete with some news about foreign editions, some new audio-video content, and, most notably, the first bits of news about the next novel, ONE TRUE SENTENCE, coming February 15 from Minotaur Books (and now available for pre-order pretty much everywhere).

Below is the cover illustration for OTS — the first Hector Lassiter novel since TOROS & TOROS to be graced by a painted cover (T&T featured a painting by the great Diego Rivera). 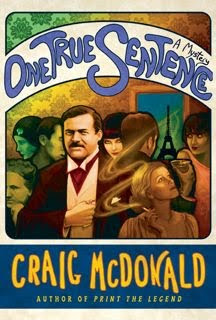 In a way, that's strangely appropriate, as ONE TRUE SENTENCE was written immediately after TOROS and envisioned as a kind of spiritual companion to TOROS.

Both novels take place relatively early in Hector Lassiter's crowded life. TOROS opened in 1935 (Hector was born on Jan. 1, 1900). ONE TRUE SENTENCE opens in February, 1924 and gives us our earliest, full length view of Hector. The novel's structure is also a good bit different than the previous entries in the series.

ONE TRUE SENTENCE is set in exactly one week of February 1924...just seven fast-moving days in Paris. The cast of characters for this one includes Gertrude Stein, Alice B. Toklas, Sylvia Beach, Ford Maddox Ford, William Carlos Williams and Jean Paul Fargue, among others.

This novel — one I'm particularly proud of — also introduces us to THE pivotal woman in Hector Lassiter's life, Brinke Devlin — a kind of mash-up of Louise Brooks and Craig Rice. Brinke is a mystery writer who shapes Hector into the man we've come to know through the earlier books and stories. (Check out the cover artist's version of Brinke below.) 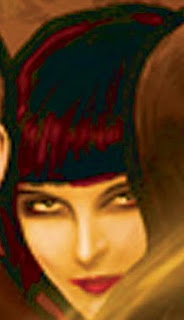 This novel also represents a kind of turning or tipping point in the series — appropriate in its way as this was envisoned, and written, as an eight-book series.

So Monday night, if you're inclined, swing by the site: there'll be plot summaries, extended blurbs from authors Margaret Maron, Diana Gabaldon, Stefanie Pintoff, Ace Atkins, Craig Holden and Tom Piccirilli...book trailers and a longish excerpt of the opening chapters of the new novel.

Down the road, you can expect more news on tour dates, special promotional items and another limited edition chapbook featuring a short story tied to ONE TRUE SENTENCE.
Posted by Craig McDonald at 6:02 PM 4 comments: