ONE TRUE SENTENCE: THE STORY BEHIND THE NOVEL

2017 Marks the 10th anniversary of Hector Lassiter's debut in HEAD GAMES, an Edgar & Anthony awards nominated novel and now available for pre-order as a graphic novel from First Second Books.

To mark the anniversary, we're taking occasional looks back at the ten novels in the Hector Lassiter series. First up, ONE TRUE SENTENCE, and an essay repackaged from its original appearance at The Rap Sheet Blog a few years ago. 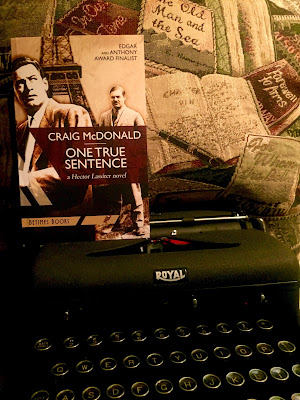 Although my series centers on Twentieth Century crime novelist and screenwriter Hector Lassiter, as many critics and readers have noted, the novels sometimes seem nearly as much about Lassiter’s longtime friend, Ernest Hemingway.

In the first Lassiter installment, the largely 1957-set Head Games, Hem was a kind of off-camera presence. Yet Hemingway cast a long enough shadow in my debut that considerably more than one reader or critic mistakenly left Head Games believing Hemingway to have been an actual character in the book.

In Lassiter #2, the decades-spanning Toros & Torsos, Hemingway was Hector’s sidekick across years of the story’s action.

Last year brought Printthe Legend, a novel turning on the possibility that Hemingway’s death in the summer of 1961 might have been something other than the suicide history records. Hemingway loomed over Print as a kind of restless ghost, and, at key points, he was seen in flashback.

Now we come to One True Sentence. In a more traditionally structured series, this novel would be a series launcher. The novel is set during one week in Paris, in February 1924.

Paris. The 1920s. We all have firm and fixed notions about how it must have been. I’m wagering most of us have had those notions set for us by at least some of the writings of Ernest Hemingway.

As OTS opens, Hector Lassiter and Ernest Hemingway are in their early twenties. They’ve had some short stories printed, but neither has yet published — hell, even completed drafting — a proper novel. It’s the youngest we’ll ever see Hector and Hem in the Lassiter series.

Already, the questions are coming my way again from early OTS interviewers and newcomers to the books: Why Hemingway?

Partly it’s because I intended the Lassiter series to be as much about key artistic movements — modernism, surrealism, post-modernism and so on — as about solving mysteries. Hemingway was a key figure who straddled or helped to define all those -isms.

Blame it, too, on young, overlapping reads of The Sun Also Rises and A Moveable Feast. Mostly the latter.

From biographies and letters, I see now how contrived or even disingenuous much of Hemingway’s posthumous memoir truly is. Doesn’t matter. I’m a trust-the-art, not-the-artist kind of guy. I was seduced, early and powerfully, by Hemingway’s portrayal of what it was like to be a young journalist and aspiring fiction writer in Paris in the 1920s; the place, Gertrude Stein famously said, “Where the Twentieth Century was.”

As a young journalist drafting novels in the evening and on weekends — albeit doing all that writing in Ohio — my life was changed by A Moveable Feast. I wanted to live that book. Hemingway became my master and kind of the literary equivalent of what Elvis represents to rockers — the goal and the cautionary example.

Knowing I couldn’t really live Hem’s memoir, I promised myself to write my own Paris novel that I could live in — to put my own vision of the City of Lights on the page. The question was what would that novel be about? Who would anchor that book? Years passed.

Between January 2005 and December 2007, as a fiction writer, I had what Hemingway used to term “a belle époque.” I wrote most of the Lassiter series, a standalone scheduled to see print later this year and the nonfiction book, Rogue Males. The pages were piling up. Simultaneously, I was re-reading a lot of Hemingway. I came back to A Moveable Feast with a grown man’s eyes.

I wrote Toros & Torsos between Halloween and Christmas of 2006. On January 1, I began to write One True Sentence (then traveling under the working title of City of Lights). My own 1920s Paris novel was unfolding in my head even as I was in the early going of composing Toros.

From the jump, OTS was envisioned to be a noir turn on A Moveable Feast and a kind of post-modern dark comedy about the mystery genre itself.

As Dick Adler wrote in a January post here at the Rap Sheet (“Hem and Gert Talk Mysteries”), Gertrude Stein was an unabashed mystery fan. She called her favorite mystery writers her “mystifiers.” In an early meeting, Stein urged on a young Hemingway a copy of Marie Belloc Lowndes’ Jack the Ripper tale, The Lodger.

I envisioned a series of murders of literary magazine editors along both banks of the Seine — crimes that would hit a commercially unviable writer like Gertrude Stein where she lived. In desperation, Stein — fixed in the Nero Wolfe-like comfort of her favorite chair in her salon — gathers to her a collection of Paris-dwelling mystery writers to stop the killings.

The detectives in One True Sentence include an Agatha Christie-esque British writer of locked-room mysteries who has long been established as Hector’s bête noire. We meet a fetching American female mystery writer named Brinke Devlin who looks like Louise Brooks and writes like Craig Rice.

Representing the hard-boiled school, we have Hector (and, in his way, Hemingway). Bouncing up against this collection of unlikely amateur detectives is a Simenon-like French inspector.

As One True Sentence unfolds, we meet characters and witness events that will inform the early novels of Hector Lassiter and Ernest Hemingway. We’re a party to a secret history of events living between the lines of Hemingway’s A Moveable Feast. We’re afforded a glimpse of the portion of the iceberg lurking below the water line to put it in Hemingway’s own artistic terms.

For Hemingway, particularly, February 1924 was a kind of pivotal moment in time. Intimations of a tipping point being reached for the young writer were just being felt.

Hem was newly returned to Paris after a disastrous return to daily journalism in Toronto. He came back with one small press collection of his writings behind him, and another pending in the fall. He became a subeditor to Ford Madox Ford’s literary magazine, The Transatlantic — a plot point in OTS. Despite no novel to support it, Hem’s reputation as a fiction writer to watch was just beginning to spread.

All of those key literary and artistic figures who appear in A Moveable Feast were in Paris that winter — crowding in some last good food and wine before abandoning the city to an expected influx of tourists anticipating Paris’ role as host city to the Summer Olympic games.

And then there were the suicides.

Paris always had its share of men and women intent upon killing themselves. The always-suicide-preoccupied Hemingway even wrote an early, undistinguished poem about all that.

Yet as the winter of 1924 unfolded in a haze of snow and freezing rain, the suicide rate in Paris spiked, particularly in artistic circles.

Handwringing journalists and the like blamed the young artistic community for the spate of self-inflicted deaths (“Terror Sweeps Latin Quarter” one 1924 French headline read). All those deaths suggested to me the key plot point for OTS. They inspired a Dada-like artistic clique called “Nada” — a dark cult embracing murder and suicide.

This, then, is the milieu of One True Sentence: A single week in Paris in all of its winter 1924 glory. Murder, sex and all those great writers and painters colliding, many of them treacherously bent upon screwing one another in something other than a carnal sense.

It seems appropriate that Papa have the last word on the time and the place:

“But Paris was a very old city and we were young and nothing was simple there, not even poverty, nor sudden money, nor the moonlight, nor right and wrong nor the breathing of someone who lay beside you in the moonlight."

Posted by Craig McDonald at 11:22 AM No comments: