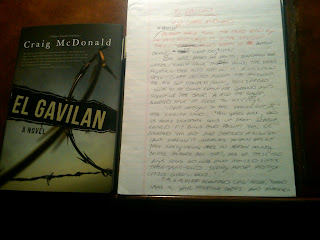 EL GAVILAN finished fourth in a field of 21 American titles over at the House of Crime and Mystery's 2012 Readers Choice Awards.

In the U.S. section, EL GAVILAN trailed Flynn, Dennis Lehane (LIVE BY NIGHT), and Michael Connelly (THE DROP). Along with EL GAVILAN, Chris Holm's DEAD HARVEST rounded out the top five on the U.S side of competition.

Thank you to all the readers who took the time to vote (for EL GAVILAN or otherwise) and your continued support of authors everywhere.

EL GAVILAN also made several year's best lists this year, including a very nice appreciation at January Magazine, which can be found here.
Posted by Craig McDonald at 10:41 AM No comments: