Last week I was an invited guest at the Quais Du Polar crime fiction festival in Lyon France from March 25-27. 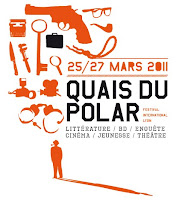 Each year, a handful of authors from various countries are invited to the festival to participate in panels, host films and meet with the French press and readers.

I arrived in France after a bumpy, sleep-deprived flight from Detroit early Friday afternoon, French time. I shared some coffee and pastries with my foreign rights agent, Svetlana Pironko, at Charles de Gaulle airport, then hopped a train for Lyon and arrived just about an hour before I was scheduled to participate on a panel regarding "the thriller of the Americas."

I represented the USA; my fellow panelists included RJ Ellory (from Great Britain, of course, but who writes books set in the United States); Patrick Sénécal, Quebec; Ramon Diaz-Eterovic, Chile and Martín Solares of Mexico (Martín's excellent novel, THE BLACK MINUTES, was a book I happened to pick up while touring in Austin, TX, a few weeks before — a highly recommended read).

The majority of authors were put up in the Hotel Carlton in Lyon, a short walk from Le Palais du Commerce, home to most of the festival's key events, and to about the most majestic book room imaginable. 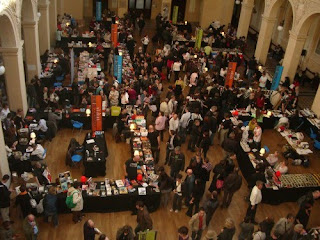 After a quick shower and change of clothes, I participated in my first panel. Because of the number of nationalities involved, and languages spoken, small radios and ear phones were necessary to understand the moderator's questions and fellow panelists' responses. The United States, and its alleged role in various foreign wars and clandestine operations, dominated much of the discussion of that first, rather charged panel.

Next we moved to the Beaux-arts Museum of Lyon for an official opening ceremony for the conference, and awards ceremony.

Friday night concluded with a dinner with my publishers and fellow writers from Belfond and its various allied imprints at Les Négociants for the first of two author's dinners.

I sat with Brian Freeman (who I will be appearing with at the Ann Arbor Library on May 7) and British novelist S.J. Parris. Brian and I agreed that our hotel — particularly its elevator — reminded us powerfully of a similar quaint lift that served as the setting for a memorable fight scene with Sean Connery in 1971's "Diamond's Are Forever."

The elevator has a gated cage that must be closed in order for the elevator to operate for the next user. 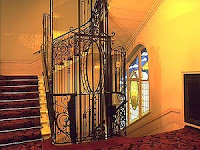 Once inside, swinging wooden doors have to be closed. The elevator itself operates on a mirrored counterweight. Because of its small size, often as not, in high demand periods, you found yourself using the spiral staircase that wraps around the open elevator shaft. This was particularly so on the way to breakfast each morning. 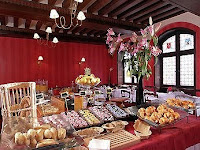 Riding up in the lift together, Brian and I ended the evening reciting lines from the Bond film that preceded the death of "Peter Franks" in just such an elevator at James Bond's hands: "I speak English...Who is your floor?"

Saturday morning, authors were asked to gather in front of the Palais for an official group photo. That was the first of many photographic sittings, as it turned out, as various photographers pulled us aside for portraits, photos of our hands and with our ink pens, and, later, with crime scene tape and even weapons of choice (I opted for a .45). 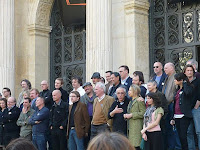 Saturday began a series of videotaped and print interviews for a number of outlets, leading up to a recording of a radio show before a live audience.

My interview with the nationally broadcast radio show Mauvais Genre hosted by François Angelier, will be aired later this year. We spoke about the Hector Lassiter series, about the tension of art and life, and about such "ogre" like figures as Hemingway and Orson Welles who appear in my novels. We also had a spirited exchange about the question of surrealist art and whether or not it embodies an element of misogyny. After the show was recorded, I was approached by two or three women who bought the French edition of TOROS & TORSOS and thanked me for making such assertions about the surrealists and their attitude towards women. "We don't hear that sort of thing very often here," one said. I was to see as I spoke with subsequent interviewers, particularly in Paris, my take on the surrealists is a very charged and controversial one.

When pressed once too often about the credibility of surrealist enthusiasts committing crimes, I pointed them in the direction of this series of crimes committed recently in France.

Saturday rounded out with signings, more photos and interviews, then a dinner we'd been hearing rumblings about involving traditional fare (talk of swine snouts abounded). We dined at Chez Paul at rue Major Martin. There I ate with the legendary French crime fiction expert, Claude Mesplède (also immortalized as a very bad ass character in James Ellroy's Underworld U.S.A. trilogy), Arni Thorarinsson and Dominique Sylvain who very kindly and patiently translated for Claude and I.

Rather flummoxed by the menu, I eventually broke down and asked for an English menu. Having done that, I felt I'd failed some test. Turns out, the menu wasn't illuminating. Still ordering somewhat blind, I made my selection, eliciting a thumbs-up from our waiter. Dominique said something like, "Do you know what you just ordered?" Claude looked at me with pity. Seems I ordered some kind of sauteed cows stomach...turns out, it was far from the strangest thing offered that night.

I walked back to the hotel with Megan Abbott and Karin Slaughter. To our chagrin, we returned to find the hotel bar had closed at an oddly early hour for a Saturday. Probably just as well: It was daylight savings time in France, and clocks would move up an hour around 3 a.m.

Sunday morning included a leisurely lunch at Le Cintra that I shared with David Peace and John Harvey, whom I'd met at the train station and rode in with on our first day by taxi. 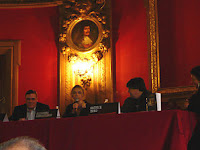 My last panel in Lyon was shared with Alexandra Schwartzbrod, Patrick Bard and moderated by Martine Laval. Discussion was focused on borders and frontiers, and much of that discussion centered on Mexico-US border tensions.

After some book signings following the panel, my publicist, Diane du Périer and I boarded the train for Paris for a rainy ride through the French countryside.

NEXT: The City of Lights and walking Hector Lassiter's Paris from ONE TRUE SENTENCE.
Posted by Craig McDonald at 4:51 PM No comments: