Proud to announce that a new series begins with the July 2022 release of "THE BLOOD OGRE: The Hellish Menace Beneath 'The House Doc Savage Built'"

The new novel is available in hardcover and trade paperback, and features a stunning cover painting of new series character "Zana O'Savin" by the terrific Douglas Klauba, with design by the great J.T. Lindroos. It is published by Night Town Books.

You can order it here:

The pitch follows (and check below for a special video)....

Writing two Shadow novels each month, Gibson uses a battery of typewriters, resting bloodied fingertips between books as he pounds out close to two million words a year. Attempting a similar impossible schedule, Dent suffers an apparent nervous breakdown—beginning to see and actually interact with his Doc Savage characters, come-to-life. 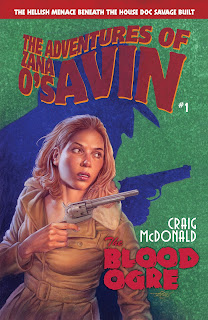 1965: The Doc Savage and Shadow pulp novels are enjoying new life in paperback, selling millions of copies. Simultaneously, people report seeing a strange, black-clad figure with coal-fire eyes around an old Greenwich Village Brownstone—the very one in which Gibson penned the last of his Shadow novels in 1949. A dabbler in the occult, Gibson insists to interviewers the specter is that of The Shadow, and is a tulpa, or “living mind-projection,” spawned by his unrivaled literary output.

But another, far more sinister “mind creature” is actively threatening the world, a tulpa hatched by an adolescent Lester Dent and left to lash out from earth’s fiery center.

Edgar Award©-finalist Craig McDonald offers a haunting mix of history and meta-fiction centered on the very act of literary creation, but served up as 21st Century, pulp-lit adventure in which pulp fiction characters literally come to life.

Posted by Craig McDonald at 12:18 PM No comments: