Sixty-five years ago today, the body of Elizabeth Short, "The Black Dahlia," was found in a vacant lot in Los Angeles.

In 2008, I published my second Hector Lassiter novel, TOROS & TORSOS, incorporating the Black Dahlia murder as a key plot point.

The Hector Lassiter series is all about secret history — a blending of fact and fiction that aims to get at something like the hidden truth.

Toros & Torsos (aka, Hector Lassiter #2), spins on the premise that surrealist art and theory may have informed or inspired several bloody, unsolved crimes of the 20th Century — most notably the murder of Elizabeth Short, the so-called “Black Dahlia” as she was dubbed by panting L.A. journalists circa January 1947.

The correspondences between Elizabeth Short’s mutilation murder and photographs and paintings by Man Ray and Salvador Dali were first put forth by Steve Hodel in his 2003 nonfiction study Black Dahlia Avenger, a New York Times notable book and Edgar® Award finalist. 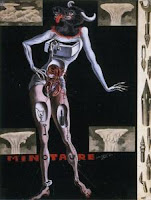 Further research in that area uncovered jaw-dropping reports of Spanish torture chambers designed and constructed to surrealist aesthetics — a sort of crazy cross between Escher and Abu Ghraib.

Life imitating art…art imitating death, and for some, it seems, it wasn’t truly art until somebody died.
Posted by Craig McDonald at 3:56 PM No comments: