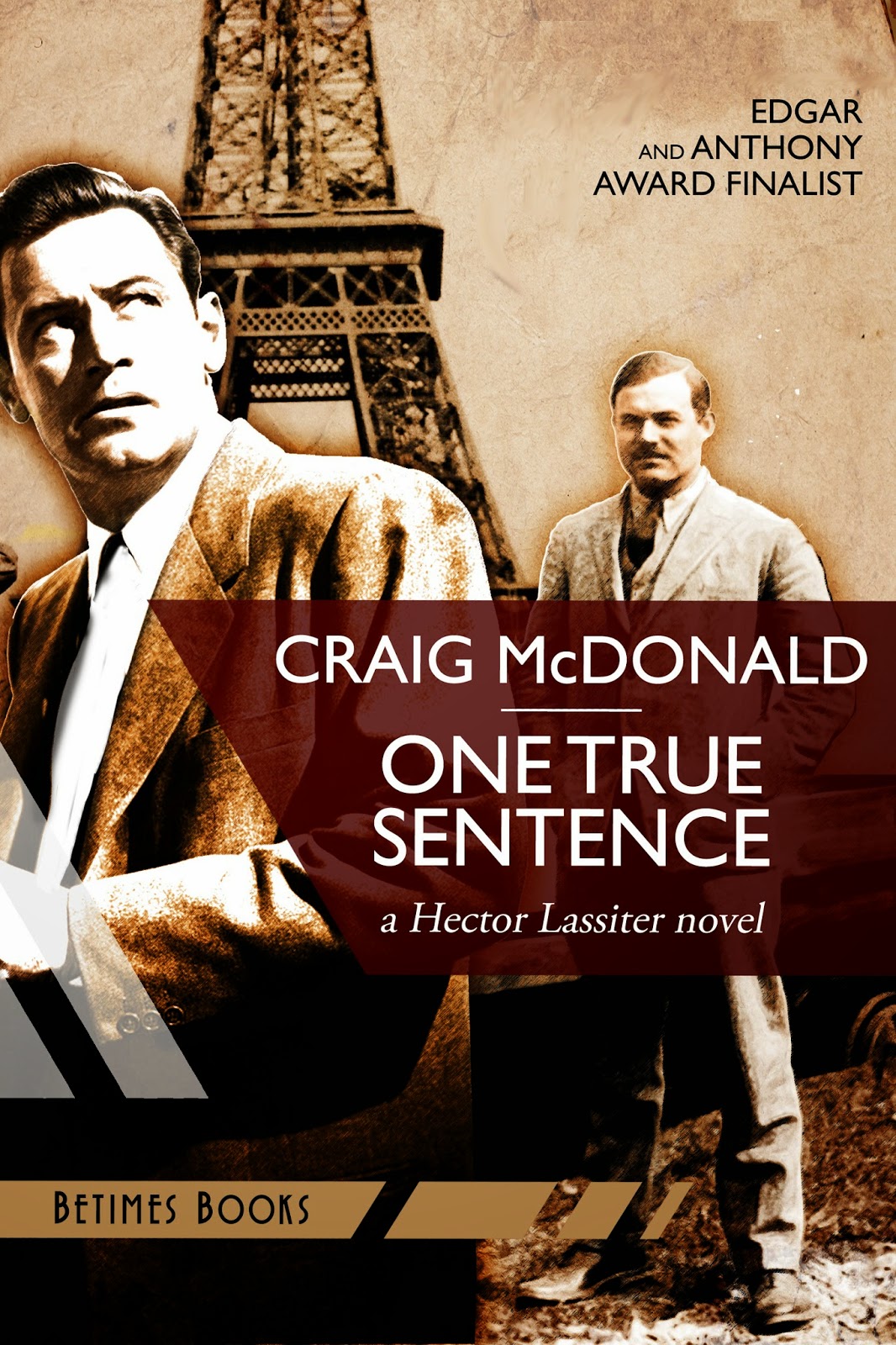 
This is the new cover for the first paperback release (and new eBook release) of ONE TRUE SENTENCE, coming quite soon from BeTimes Books.

The cover sets the template for the nine volumes to be released over the course of the next few months as the entire series of Hector Lassiter novels comes your way in rapid-fire fashion.

This cover was designed by JT Lindroos, who provided covers for my author interview collection ART IN THE BLOOD way back in ought-six, as well as a new genre-blending thriller called IMMORTAL GAIN (more on that soon, too) and the Chris Lyon series.

OTS will be closely followed by FOREVER'S JUST PRETEND, which features Brinke Devlin, the woman who made Hector into the man we know. Brinke of course made her debut in OTS, which is set in one week in Paris in February, 1924.

Here's the jacket description of ONE TRUE SENTENCE, followed by a new teaser trailer:

February, 1924: an incredible exchange rate, lack of prohibition and post-war ennui have flooded the City of Light with thousands of Americans — the psychologically damaged members of the so-called Lost Generation. The cafés, bistros and garrets of Paris teem with would-be poets, writers and painters.
Among them are two young and unknown authors — Hector Lassiter and Ernest Hemingway. Both young men are mavericks and realists who stand apart from the trendy schools of creativity sweeping Paris — Cubism, Dadaism and Surrealism. But a new vogue is gaining ground and threatening the lives of Hector and Ernest’s closest friends: “Nada,” a cult that drives its disciples to acts of murder and self-destruction.
One by one, editors of Left Bank literary magazines are slaughtered in increasingly brazen attacks. As the killings escalate, the literati form their own improbable vigilante band to catch the killers. Drawn into the hunt, Hector is pitched between two attractive mystery writers and a pretty, unbalanced poet — three women with hidden agendas and dark imaginations…

Praise for One True Sentence

"Vivid, remarkable characters--the historical people as well-drawn as the fictional ones!--in a rich, evocative setting, and a gruesome serial killer with one of the most unusual motives ever. Absolutely gripping!" —Diana Gabaldon, New York Times bestselling author of the Outlander series

“Craig McDonald proves he is a master of literary suspense in this riveting historical thriller set in the 1920s Paris of Ernest Hemingway and Gertrude Stein.  Complex protagonists, shocking murders, and a gripping tale will leave you wanting more.” —Stefanie Pintoff, Edgar-award winning author of A Curtain Falls

"Nobody does mad pulp history like Craig McDonald. Reading a Hector Lassiter novel is like having a great uncle pull you aside, pour you a tumbler of rye, and tell you a story about how the 20th century really went down." —Duane Swierczynski, author of Expiration Date

"A finely-crafted pulp historical mystery…While McDonald plucks your heartstrings, his wily hero Hector Lassiter will pound out a drum roll on your short ribs, and yes, you actually will be thankful for the experience." —Tom Piccirilli, author of Shadow Season

“The real stuff… Sharp, smart, and fascinating. McDonald brings alive a unique time and place with not only his talent for history but style that would make his subjects proud.” —Ace Atkins, author of Devil’s Garden and Infamous

“An amazing montage of mystery, murder, meta-fiction, and literary-history, quite unlike anything I’ve read before. ” —Craig Holden, author of The Jazz Bird
Posted by Craig McDonald at 12:09 PM No comments: