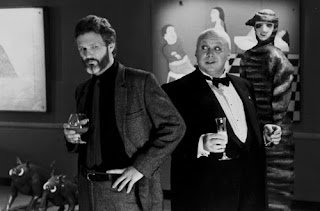 @nj713 "So it's true what they say about hair on your palms."
Posted by Craig McDonald at 9:19 PM No comments:

THIS WEEK'S WINNER IN THE ONE TRUE SENTENCE CONTEST & MORE... 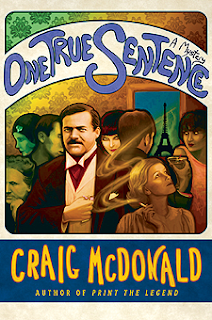 We've wrapped up week two of playing ONE TRUE SENTENCE — the game modeled on the one that Hector Lassiter and Ernest Hemingway play in my novels: one starts a sentence; the other finishes it, short and pithy.

The winner of this week's round was Judy Bobalik: "If slaying Chet was a sin, how come it didn't feel good?" Judy wins the ultra-rare TOROS & TORSOS limited edition (the novel in which Hem and Hec most frequently play the game).

Oscar night, we kicked off Week Three of the ONE TRUE SENTENCE challenge. This coming Sunday, the winner who produces the week's best ONE TRUE SENTENCE will receive a signed copy of my Macavity-nominated second collection of author interviews, ROGUE MALES, with their true sentence inscribed inside.

Before hitting the Sunday night recap of the Oscar edition of ONE TRUE SENTENCE, a note that I'll be guest blogging on Monday at Megan Abbot and Sara Gran's site here.

Over the past week, I logged mucho miles, hitting Murder by The Book in Houston, Book People in Austin, and, in a special event with James Sallis, Poisoned Pen in Arizona. If you're looking for signed copies of ONE TRUE SENTENCE, any of those fine stores can see to your needs. Speaking of that latter event, an-after-event shot of Mr. Sallis signing books with me: 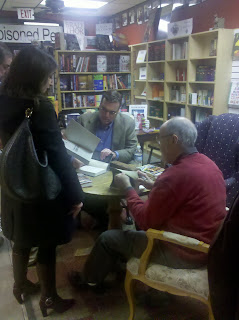 A last reminder that GoodReads is offering a chance to win one of eight copies of ONE TRUE SENTENCE. Details here.

Okay, our recap of the Oscar/Sunday night round of ONE TRUE SENTENCE (you can play Monday by checking in here.)

Sue and Ken had a shotgun wedding; when it came time to divorce…

@WarZoneCameron Sue wanted everything, including his prized Superpro comics.

@JudyJB a wood-chipper came in handy.

@scottchasebooks she decided to use it again.

@RuroRemy he felt that the Academy Award on the fireplace mantel was enough.

@ RuroRemy it was time to dig up the hatchet.

@KD_James Sue's daddy made sure that this time the shotgun was loaded.

@jennsbookshelf it was a full blown armory.

@picky_girl the shotgun came back out.

@jenforbus they pulled the pins from their grenades.

@jasummerell they were still fighting over the color of the tiny casket.

@...brianlindenmuth it was a Saturday night special.

@ JHammons they employed an ax.

@bkfaerie they both had to shell out...

@APMonkey Ken used a stake through the heart to be sure.

@hilarydavidson the only question was who'd reach for the gun first.

@nelizadrew neither could remember the lock code, so Sue used it as a bludgeon.

@djgerg it was atomic all the way.

@matthewjmcbride the dissolution was confirmed by the razor sharp teeth of a chainsaw.

@dboshea it was no more pump, no more side-by-side.

@scubagirl7 the bloodshed looked like a scene from Texas chainsaw massacre.

@dboshea he saved the second barrel for her lawyer.

@matthewjmcbride Sue laid down the terms with rounds of severe uncompromising gunfire.

@dboshea Sue and Ken had a shotgun wedding; when it came time to divorce, she gave him full custody of both barrels.

@SebDuper one of them got sawed-off.
Posted by Craig McDonald at 8:07 PM No comments: