In recent days, a number of reviewers have turned their attention to EL GAVILAN (officially released about a week ago yesterday):

The New York Journal of Books says, "Craig McDonald uses his skills to write a drama that demands the reader pay attention, if a character has a Latino or Anglo name, the reader can’t make assumptions about where the character’s sympathies lie. His descriptions of the town and the characters are that vivid.”

The Huntington News calls EL GAVILAN: "A nuanced crime thriller," and notes, "It's difficult to find a good book that explores the tensions in the nation's heartland fueled by both legal and illegal immigration, but I think Craig McDonald has aced it in 'El Gavilan.'"

From Shelf-Awareness: "McDonald smudges the lines between right and wrong, leaving readers with potentially conflicting feelings about the characters. It's this conflict that makes 'El Gavilan' so irresistible: love or hate the characters, you can't help but invest in them. The story draws further power from McDonald's descriptive skills, as the sights, sounds and even the smells of his fictitious Ohio town reach from the pages and pull the reader in. 'El Gavilan' proves that Craig McDonald is as capable working in the contemporary thriller as he is with historicals."

And from Technorati: "McDonald explores values, attitudes, emotion, ethics, relationships, and the nature of intolerance in a satisfying, thought-provoking novel. Well-developed characters with unsteady moral compasses populate the pages of 'El Gavilan,' giving the reader much to consider and reconsider."

ONE WEEK LEFT TO WIN THE ULTIMATE EL GAVILAN RARITY 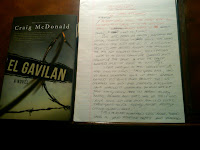 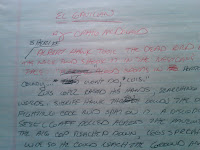 Posted by Craig McDonald at 7:48 AM No comments: