Now that 2015 is well and truly at our backs, some thoughts on the handful of books that best reached me this past year.

(Last note for context: Many, many more books were read over the past twelve months; far fewer were fully enjoyed. Sadly, 2015 might well represent the year in which I more or less began an indefinite hiatus from reading most mystery and crime fiction releases. I seem to find myself much more drawn to westerns, historical novels and novellas heading into 2016.) 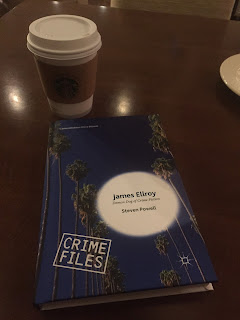 Nonfiction:
My favorite nonfiction read came this year from Palgrave and James Ellroy scholar-supreme Steven Powell. My full review of this one is forthcoming via Crimespree Magazine, but here’s a capsule take on Mr. Powell’s excellent study on Mr. Ellroy, “James Ellroy Demon Dog of Crime Fiction”:

“Focused most squarely on Ellroy’s fiction, Powell’s richly researched study pays intelligent and valuable attention not just to Ellroy’s early, often neglected or overlooked novels, but some of his uncompleted projects, as well.

“Powell’s book is a must for Ellroy’s fans and his detractors: a clear-eyed study and assessment of an audacious author who has in many ways subverted and reinvented crime fiction while simultaneously crafting a persona that sometimes threatens to overshadow those achievements.”

Fiction:
At least a couple of these titles fall only loosely under this heading—I confess that up front.

The novel I wholly savored (both in bound form, and as an audio book via Recorded Books and narrator John Lee) was the latest in an ongoing series from the Godfather of Irish Noir. 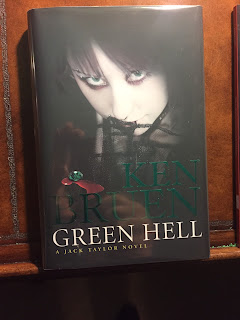 Ken Bruen’s “Green Hell,” the eleventh entry in his Jack Taylor series, was a bracing pleasure. I most loved this latest entry for its meta-fictional, funhouse take on Bruen’ Galway investigator.

A young scholar decides to write the book, so to speak, on our Mr. Taylor, the ex-Irish cop turned private detective.

As a result, we get a very different point of view on the sardonic, addiction-plagued and bibliophilic Mr. Taylor.

Bruen also takes us on a kind of “darkest hits” tour of Jack’s past disasters as this would-be Boswell traces his subject’s wicked history ala the faceless reporter who tracks the losses of a certain newspaper tycoon in Orson Welles’ “Citizen Kane.”

It’s no mean feat to come up with something truly fresh in a continuing series roughly a dozen installments in, but Ken Bruen does so, brilliantly. 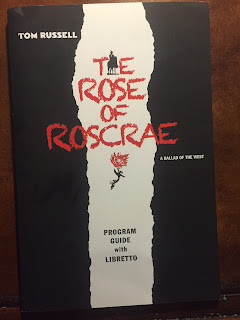 “The Rose of Roscrae, A Ballad of the West” by Tom Russell, accompanies his brilliant double album that I reviewed earlier this year (and which remains my favorite 2015 musical release). The annex book is touted as, “A program guide with Libretto.”

The slender volume, which also contains the lyrics to said album, is equal parts artistic mission statement, director’s-cut audio commentary and a sort of Cliff Notes songcatcher’s treasure trove that gives us a tour of the songwriter’s craft reaching back to handed-down Celtic airs and indigenous American folksongs we know but don’t really know nearly enough about.

Here’s an opening line to sink your reader’s teeth into:

“In the 1970s, workers tearing down the fun House at the Long Beach Pike, near where I grew up in L.A., discovered a dummy on the wall—which turned out to be the mummified remains of an old gunfighter… It got me to thinkin’…”

Among the many artists who perform on Russell’s album is the brilliant Nashville-based singer-songwriter David Olney. 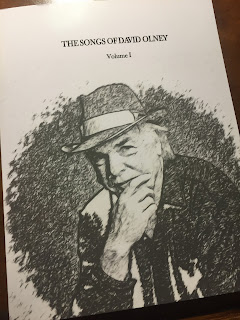 Mr. Olney penned a song about a French prostitute and her World War I veteran “client” that I first heard and fell in love with a few years back via an Emmy Lou Harris cover and titled “1917 — The French Prostitute.” (Here's a killer version from the writer himself.)

That track was first made known to me via the afore-praised Ken Bruen. (These sort of strange, cross-connections between my favorites seem to come up in my life as audience, a lot.)

Olney recently released a first smattering of collected lyrics under the title, “The Songs of David Olney, Volume I.”

Mr. Olney has tremendous range and reach as a songwriter and composer. I keep finding songs I’ve been attached to here and there that prove to be his babies.

Along with a revelatory introduction, the songwriter provides little vignettes or histories explaining the spark or epiphany behind each piece of writing.

Here’s an excerpt shedding further light on one of my favorites of his songs, “If I Were You”:

“This song seems so simple and yet, to me, it’s very complex. As soon as you say, “if I were you …” It becomes murky as to who is being referred to. Is it me or you? Who put a candle in the window, me or you?”

Here’s a video of Mr. Olney performing that tune with the also brilliant Sergio Webb:

My last favorite was a book of poetry by James Sallis, “Black Night’s Gonna Catch Me Here: New and Selected Poems” from New Rivers Press.

Mr. Sallis also has the distinction of having penned two of my favorite “crime novel” series, a brilliant biography of Chester Himes, wonderful volumes of short story collections and various translations and scholarly books on the guitar. He is also a frequent and gifted reviewer of other authors, as well as a noted fiction writing instructor. 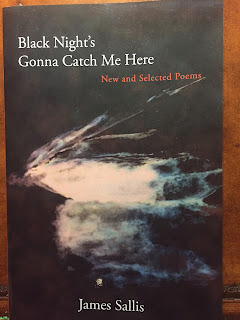 Here’s just a snippet, from “Excuses for Rain”:

“Words roll between us,
the old words, and I have come to tell you
how rain regrets its decision,

“how very hard it has tried
to make the world something else
for you.”

(Mr. Sallis has a new novel coming in 2016 that sounds quite promising. Preview, and pre-order, here.)

There were some other good and savored reads last year, to be sure, but these were exclusively older books that were new only to me, or which I chose to revisit for a sure-fire read when the new stuff was disappointing.

Heading into 2016, I have some new volumes on Ernest Hemingway, some Les Edgerton and a couple of can’t-talk-about-them yet ARCs to explore.

My resolution—the only one I feel truly comfortable making on this first day of the uncertain new year—is to use this space more aggressively in the coming year as a kind of reader and music-fan’s diary.