Publishers Weekly has weighed in on the first new Hector Lassiter novel in three years.

"Entertaining...a must read for series fans and a solid introduction for new readers."

ROLL THE CREDITS: Paperback/eBook
Posted by Craig McDonald at 9:43 PM No comments: 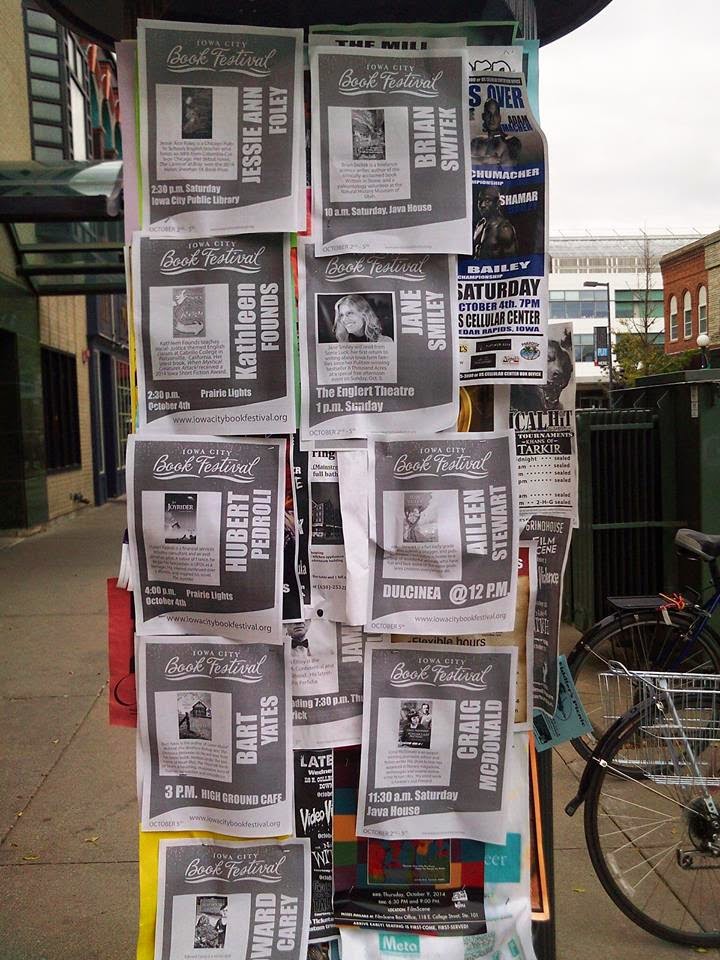 I had the great privilege of participating in several events during this year's just-concluded 2014 Iowa City Book Festival.

Festivities opened Thursday night with a free event in a spooky old church (some time ago "retired" as a house of worship) that  focused on James Ellroy and his new novel, PERFIDIA.

Mr. Ellroy rapped a bit, then read an excerpt from PERFIDIA. We followed with about 40 minutes of wide-ranging conversation before a packed house. After, we took audience questions and signed our respective works. 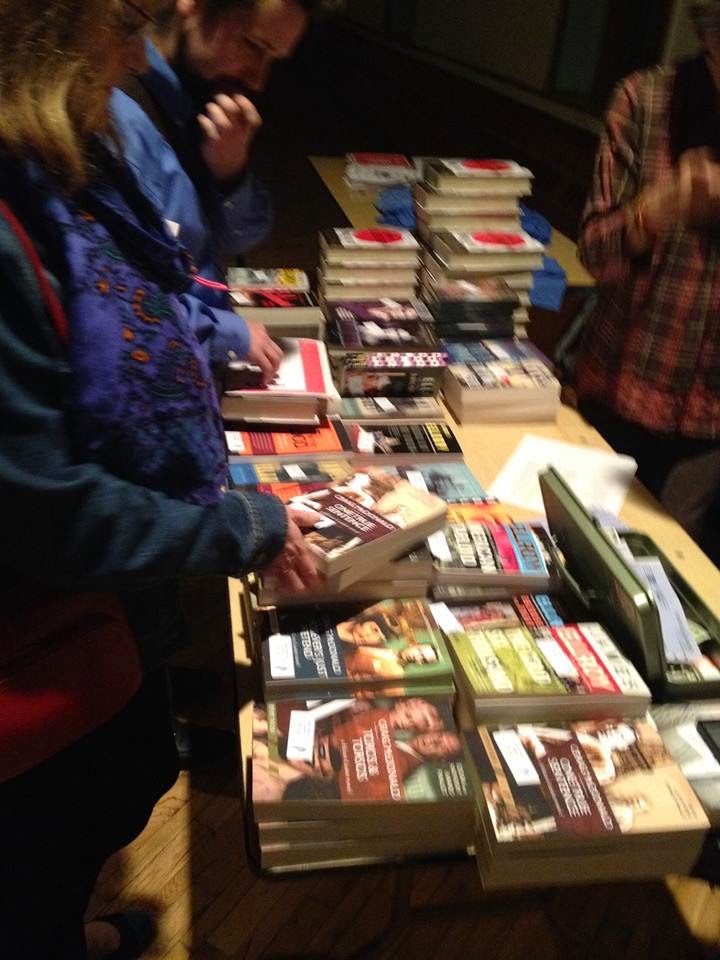 I'm told at least one film crew documented the exchange and it will likely appear online soon. In the meantime, here are some bullet points regarding Mr. Ellroy's new novel, the first in his emerging "Second L.A. Quartet."

• Mr. Ellroy reread all of the novels in his original L.A. Quartet and subsequent Underworld USA Trilogy in preparation for PERFIDIA, taking detailed notes about his earlier characters that he blended with researcher's notes regarding World War II and war-era Los Angeles. 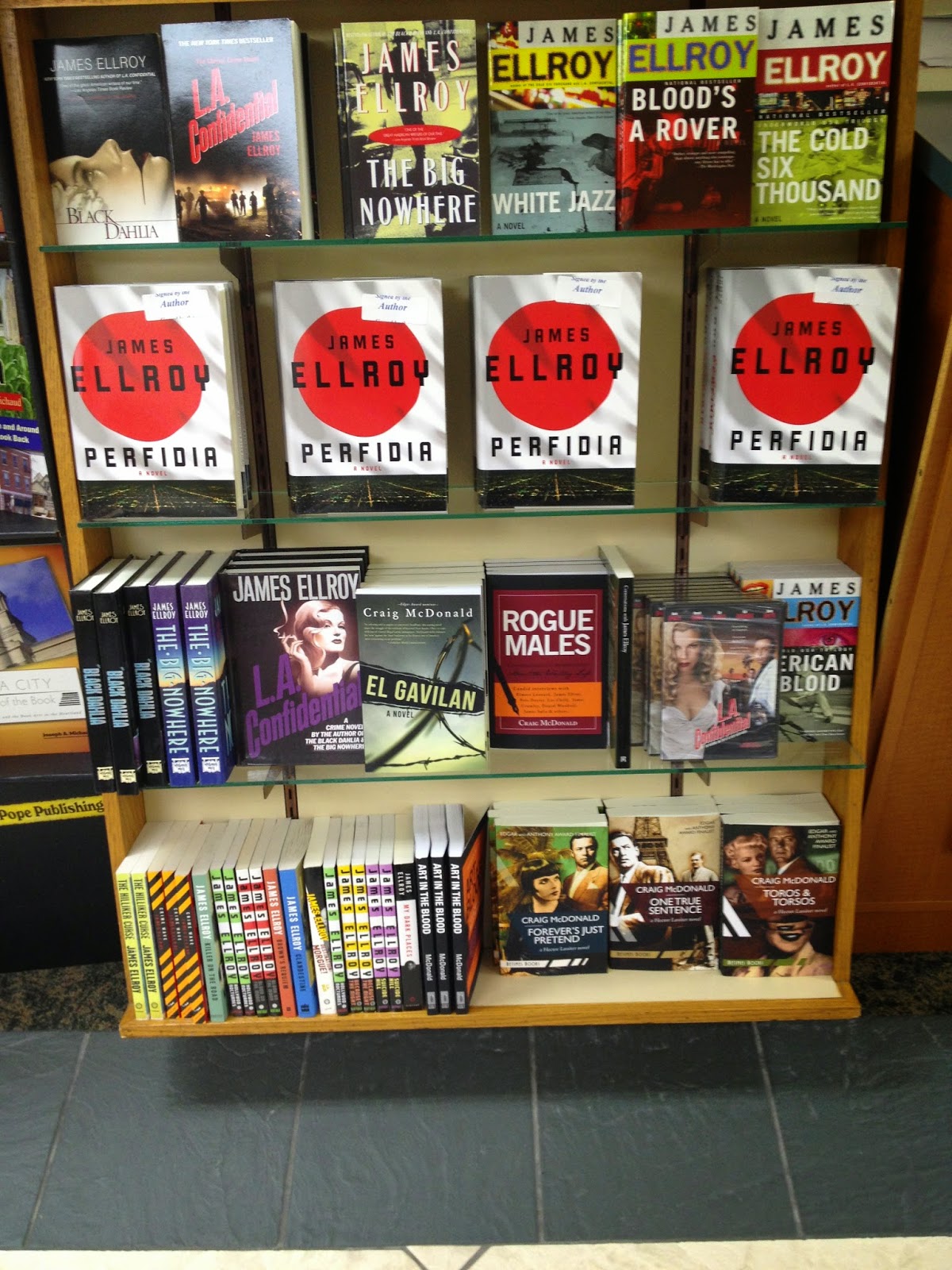 • He confirmed having an overarching plan for the next three novels in the four-book series, pledging he will deliver "a seamless continuity" across all of the various works. 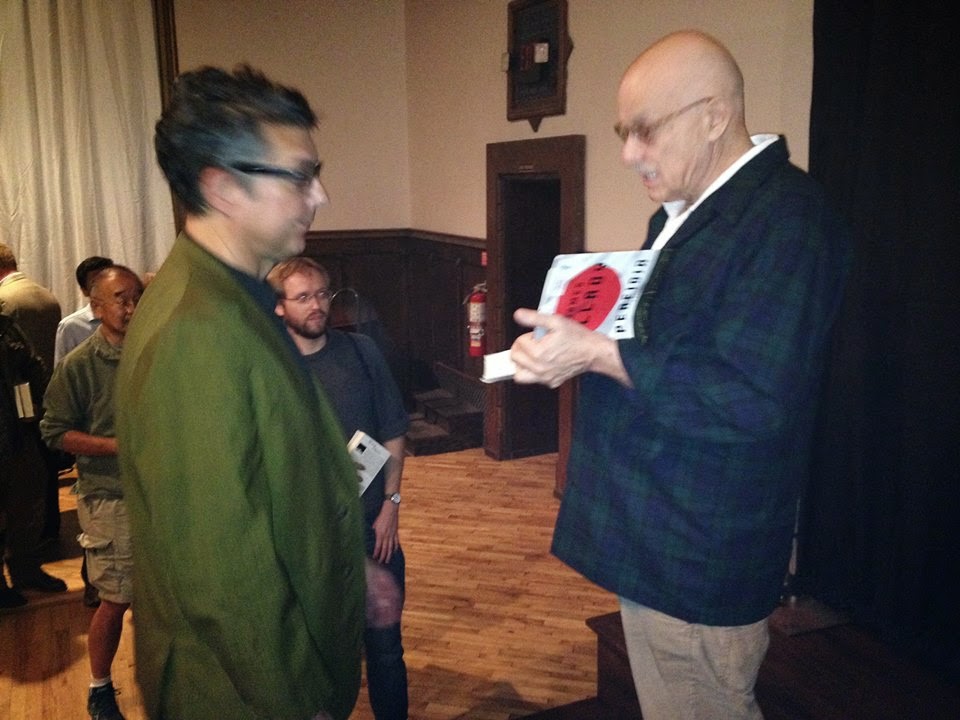 • As implied by its title, the Second L.A. Quartet (which is technically the first as it's conceived as a prequel) will largely confine itself to Los Angeles. We shouldn't expect to follow any old or new characters to the European or Asian theaters of combat in volumes to come, he said.

• Mr. Ellroy did give some hints about volume two of the new series, which he expects to land in about two-and-a-half-years. As foreshadowed in PERFIDIA, we'll be going south of the border for at least a bit of the next book in the company of "lexicon with a brogue" Dudley Liam Smith, whom PERFIDIA indeed indicates is soon-to-be Mexico-bound.

• The Japanese internments at Manzanar and similar camps are also expected to figure in the new book. For some melodic backstory on that dubious chapter of American history, an older song from Ellroy's fellow Angeleno and contemporary, singer/songwriter Tom Russell, as sung by Tom Paxton:


• Dudley Smith debuted along with his deadly minions Dick Carlisle and Mike Breuning in Ellroy's second novel, CLANDESTINE, also set in the 1950s. Asked if he views that novel fitting into this new, larger conception in any way, Ellroy said he emphatically did not, describing CLANDESTINE as one of his "kid writer" books and a straight-to-paperback effort he views as apart from Smith's other appearances in his mature works and this larger, emerging saga.

• Mr. Ellroy is noted for the extensive outlines he uses to create his novels. The outline for PERFIDIA ran to over 700 pages. The U.S. hardcover of the finished book from Knopf also weighs in at 700-plus pages. However, Ellroy noted the original manuscript of PERFIDIA exceeded a thousand pages.

• Mr. Ellroy intended to use his mother as an on-the-page character in his new series, but his editor balked, so she's instead hinted at under an altered identity.

• Some non-book items: Mr. Ellroy confirmed he is working with filmmaker David Fincher on a potential project based on his eBook original novella "Shakedown," centered on real life (and deceased private eye) Fred Otash. Having said that, Mr. Ellroy made no promises the project would ultimately see the light of day.

• He is also working on a script for a new version of the classic film noir "Laura."

On Friday night, a special screening of the Oscar-winning L.A. CONFIDENTIAL was held at FilmScene. While still praising of the work, Mr. Ellroy expressed his opinion the adaptation of his novel is not a "profound" film. It has some significant plot issues, he said, and he isn't convinced by several of the leads. He did, however, praise Guy Pearce and Danny DeVito, as he has done previously.

On Saturday morning, I participated in a discussion with Levi Stahl, editor of a terrific collection of nonfiction pieces by the late-Donald Westlake he calls THE GETAWAY CAR. 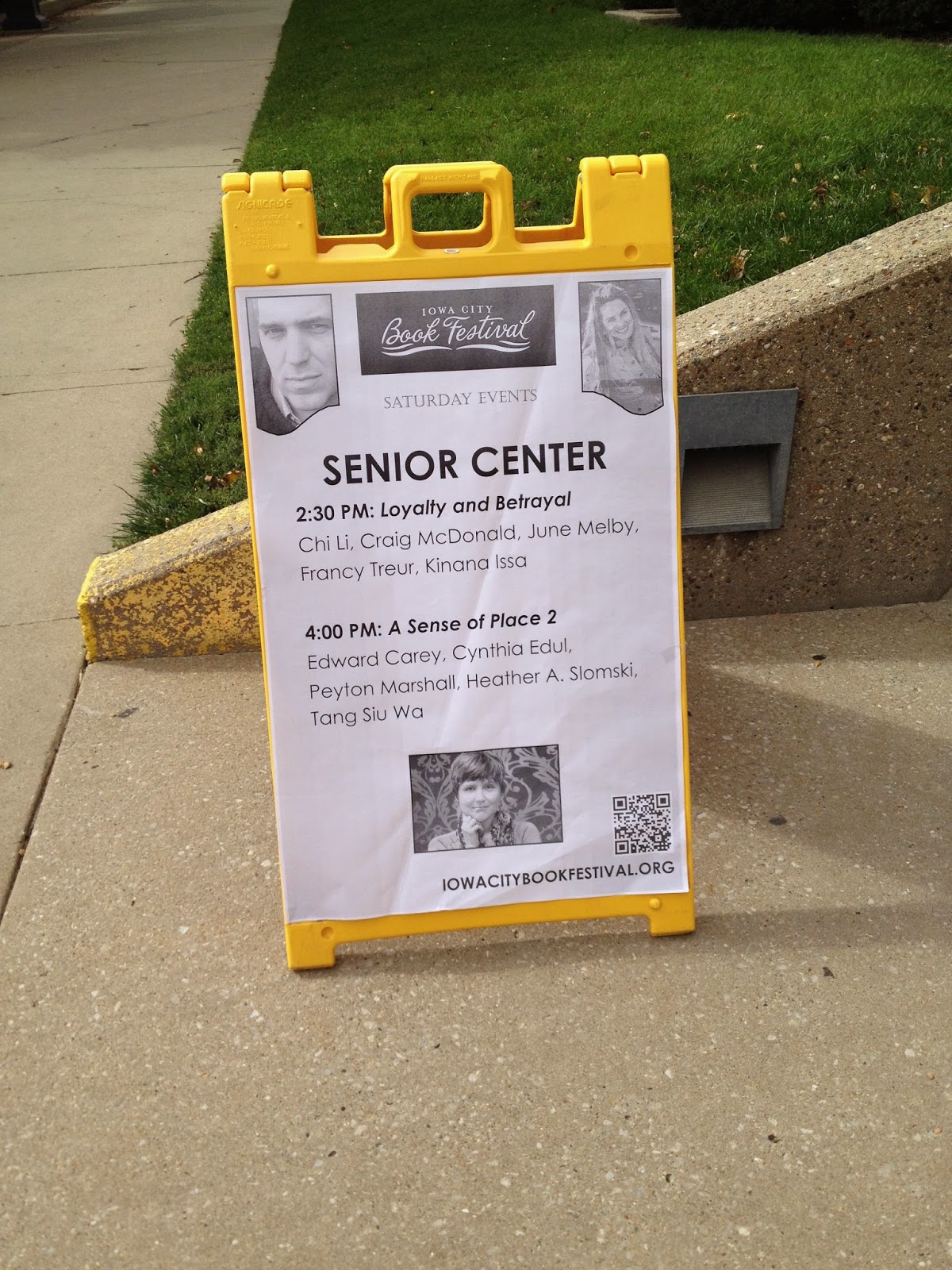 Mr. Stahl and I briefly discussed our respective works, then read some excerpts (I read from the opening pages of FOREVER'S JUST PRETEND).

After, we discussed crime and mystery writers, the craft of crime fiction, and some little known facts about Mr. Westlake, including a youthful criminal act that briefly landed him in jail and may have had an impact on Westlake's later writing career (particularly in terms of subject matter and a potential identification with lawbreakers).

Later that same afternoon, I joined Franca Treur, Kinana Issa, June Melby, Chi Li and Jon McGoran for a panel on the twin and tangled topics of "Loyalty and Betrayal." 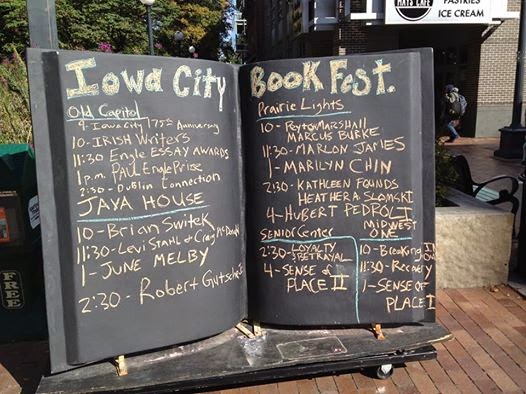 The very craft of writing was addressed from various perspectives as a kind of potential betrayal by several of us on the panel, although our takes on how the craft of constructing a story—be it "true" or "false"—constitutes betrayal or loyalty reflected significant variation.

For my part, I also discussed some of the exterior factors I feel impel today's writers to potentially "betray" their craft in quietly insidious ways—the pervasive demand for constant attention to "platform" and potentially off-putting self-promotion through social media and the like...tasks that threaten to distract from the actual writing.

As you may have already gathered, our panel was decidedly multi-cultural (in addition to we three Americans, the other authors represented Syria, the Netherlands and China).

It was striking, at least to me, how some of the non-U.S. authors discounted any pressures they felt exerted upon them for similar self-promotional efforts by their publishers or respective cultures.

Saturday closed with a "Noir at the Bar" event at FilmScene with fellow crime writers John Kenyon, Jon McGoran and Scott Phillips. We took turns doing some readings. (In a playful gesture, I read a bit from PRINT THE LEGEND, in which perceived genre writer Hector Lassiter finds himself keynoting a literary event and brushing shoulders with sometimes askance literary academics).

Following our readings, Scott introduced a screening of THE ICE HARVEST, based on his acclaimed novel of the same name and directed by the late-Harold Ramis.


I want to thank the organizers of this terrific festival and all those great people of Iowa City who turned out for events spread out across the former churches, the coffee shops, senior centers and movie houses of Iowa City.

Posted by Craig McDonald at 9:18 PM No comments: 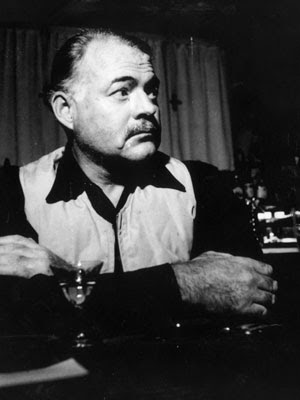 You can make a good case for Ernest Hemingway having left a profound mark on hardboiled crime fiction.

Graduate students and crime fiction aficionados have murdered trees arguing whether Hemingway influenced Dashiell Hammett or whether inspiration ran the other direction.
Raymond Chandler incorporated Hemingway in his fiction, wrote an astonishingly inept parody of Hemingway prose and staunchly defended Hem’s much-pilloried novel Across the River and Into the Trees. 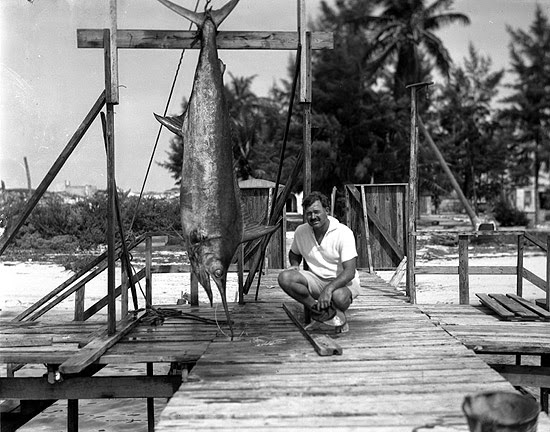 Hem’s had many near brushes with composing crime fiction: “The Killers,” that opening Tommy gun salvo in To Have and Have Not and his aborted crime novel Jimmy Breen (dropped in favor of A Farewell to Arms) — all toed the genre line. Hemingway was in fact a frequent crime fiction and thriller reader.
In A Moveable Feast, he writes of Gertrude Stein giving him a copy of Lowndes’ Jack the Ripper novel The Lodger, sending Hem off on a Lowndes reading tear. Later, he moved on to Simenon, and letters and book requests sent his editor indicate Hemingway also sampled Chandler, Hammett and Ian Fleming.
In the Cuba portion of Toros & Torsos, I allude to a woman’s mutilated torso that was found not far from Hem’s Cuban home, the Finca Vigia. This is not an invention on my part: the murder is remarked on in several Hemingway biographies. 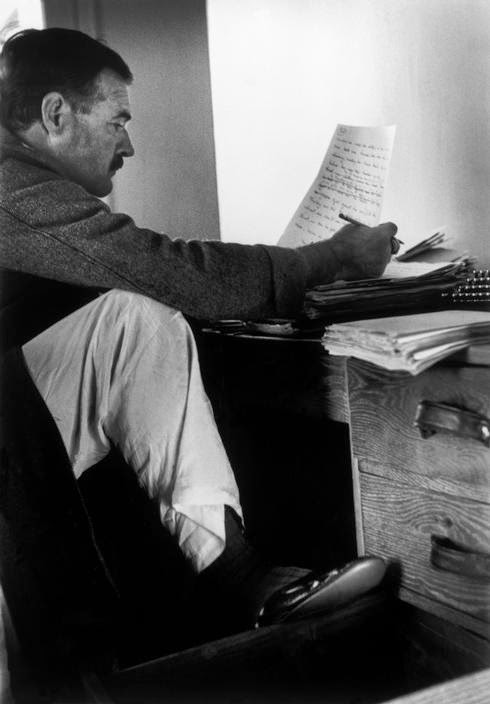 Presumably unsolved, the mutilation murder was variously ascribed to a deranged spouse or boyfriend, the Cleveland Torso Slayer, some other serial killer or some bizarre rite associated with a secretive religious cult peculiar to Cuba.
Whatever the truth behind the grisly murder, it clearly made a very strong impression on Ernest Hemingway as he writes about it in an eerie passage that survives in his posthumously published novel Islands in the Stream.