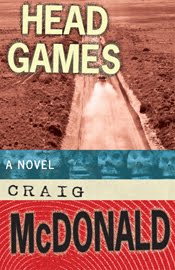 Starting today and continuing through the Labor Day weekend, HEAD GAMES, my 2007 debut novel, is available for free download exclusively for your Kindle right here.

This is the novel that introduced crime novelist Hector Lassiter, “the man who lives what he writes and writes what he lives”—the internationally critically acclaimed character who went on to headline TOROS & TORSOS, PRINT THE LEGEND and last year’s ONE TRUE SENTENCE.

"This slick caper novel touches chords of myth, history, loss and redemption just enough so you can hear echoes faintly under the gunfire."
—Publishers Weekly 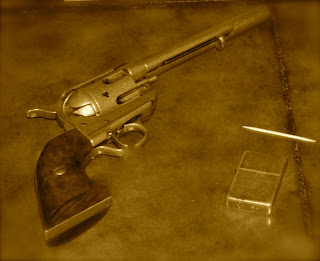 "Yeah, I'm late catching up to this guy, but damned if this 1950's set tale of a crime writer carrying the head of a Mexican rebel in a bag across some kind of crazy road trip didn't set my pulse racing. There's a strange switch at a late stage in the novel which might divide some readers in the way the ending of No Country For Old Men did its audience, but for my money it's a bold move that more or less works exactly as intended. This McDonald guy is definitely one to keep your eye on."
—RUSSEL D. MCLEAN

Posted by Craig McDonald at 9:26 AM No comments: