BOOK REVIEW: CEREMONIES OF THE HORSEMEN, BY TOM RUSSELL

On balance, it’s been a top-shelf year for reading (and some re-reading), most of it centered on novels, biographies and historical books related to—or of an era close to—a current writing project of my own. 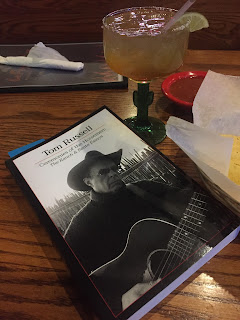 This year’s round of reading took me through swaths of excellent books by Mary Doria Russell (the Doc Holliday novels), Charles Portis (all of it), Larry McMurtry and some revisited Cormac McCarthy, among others.

Crimespree Magazine, for whom I write a regular column, recently asked for my top five reads of the year for an online feature, so that effectively pre-empts my annual round up of same in this space.

Instead, I thought I’d expand on what I regard as my single most enjoyable read this year.

The criminologist/singer-songwriter/painter and now essayist gathers a stunning array of prose pieces on topics ranging from the history of tequila, to filmmaker Monte Hellman, to Tex Ritter, to Georgia O’Keefe, to Hemingway and the neglected novels of the aforementioned Charles Portis.

At once erudite and occasionally raucous—but always gripping—it’s a bit like reading lyrical, deep-dive Americana pieces penned by Sam Groom’s “The Stranger” from THE BIG LEBOWSKI.

In his introduction, Russell sums up the terrain thusly:

“These essays are my own Moveable Feast (to borrow from Hemingway) of a time spent mostly in The West. Bill Reynolds never altered a word, that I can recall, and also allowed your reporter to stumble, headlong, down grammatically innocent back roads at my own peril and pleasure, with a snorting distaste for the semi-colon. As the legendary Anton Chekhov stated: ‘It’s not so much what I have see as how I have seen it.’ The job.”

You don’t have to know Russell’s music to gulp down or savor these essays as they’re presented.
This is an author who has a particularly lyrical way with words who is writing about his passions and sharing his own lifetime’s earned wisdom on the subject of the West, art and the often unexpected or previously unexplored intersections between.

A sample: “In the early 1960s Johnny Cash used to roam out here, kicking at cow skulls and digging up old bottles and bones — communing with the desert spirits. Talking to himself. Something was gnawing at him. What happened to the old-time cowboys and prospectors? Where had the Old West gone? The Indians who’d painted on these cave walls? What was their story? Johnny was acrawl with nerves back then. Fidgety. Restless. He’d trek deep into the Western outback. Disappearing for days. Hearing voices. Talking to the ghosts inside his skull.” — excerpt from the essay, “Bitter Tears & Mean as Hell: Johnny Cash in the Wild West”

This volume joins a rich and diverse collection of other great Russell books, including earlier tomes on his painting, on Charles Bukowski, a collection of songwriting quotes, a recent volume collecting the lyrics to many of Russell’s most noted songs, and a fine little book tied to his most recent studio release, The ROSE OF ROSCRAE.

Highly recommended, and a book I’m sure I’ll be dipping back into, often, in the coming New Year. 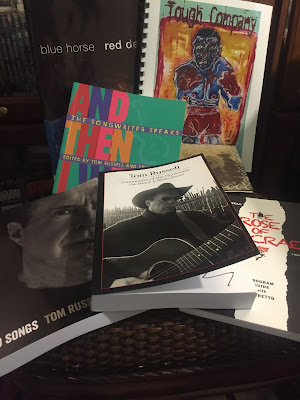 Posted by Craig McDonald at 5:37 PM No comments:

A little over a week ago, Entertainment Weekly provided the world reveal of the HEAD GAMES graphic novel coming Oct. 24, 2017 from First Second (Macmillan) Books.

Now, First Second and Macmillan have posted eight pages from the coming graphic novel on the official book site. You can see those right here. 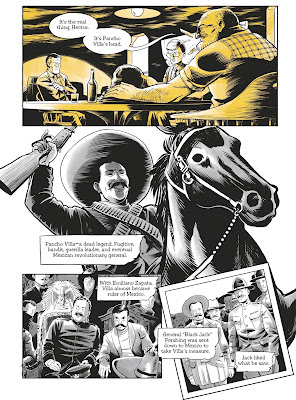 Posted by Craig McDonald at 10:15 AM No comments: