GIVING VOICE AND FACE TO CHARACTER: THE LASSITER AUDIO BOOKS 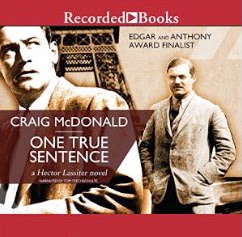 The past few days, I've had several posts regarding cover design and the visual strategies and approaches taken with Betimes Books to repackage and relaunch the Hector Lassiter series.

As it happens, the redesign efforts also ended up encompassing the audio book versions of the four Lassiter novels so-far recorded by Recorded Books. (Head Games, Toros & Torsos, Print the Legend and One True Sentence.)

The new covers for the Betimes print editions were adapted for use by Recorded Books.

In their original versions, much like the print versions of my books, the audio covers had been a pretty disparate mix of styles and approaches. 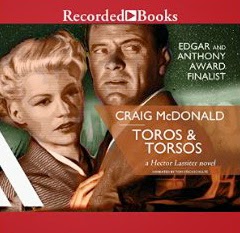 Now, for the first time, both the audio versions and novels, are uniform in their presentation.

If you haven't sampled these recordings, I highly recommend you do so, not because I wrote them, but because of the performance of their reader, the very sublime Tom Stechschulte. I had requested Tom as the voice of Hector Lassiter and all those fictional and historical figures who populate his world.

I've remarked several times—and mean it—that listening to Tom read the Lassiter books is as close as I can ever come to experiencing them as a reader. Since I have to read each novel so many times in composition, revision and proof, I can't really read them on the printed page and assimilate them as a story. 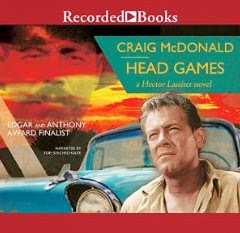 Somehow, I can listen to them as a radio play and I tend to get caught up enough in performance to forget where the story is headed.

And then there is Tom. He really gets Hector Lassiter and puts across not just the text and dialogue as written, but the subtext, as well. And, his interpretations of the historical figures, from George W. Bush to Orson Welles, are pretty wonderful, evoking the character and feel of those personages without sliding over into simple, Rich Little-style imitation.

(Ernest Hemingway should have been so lucky as to have the voice Tom gives Papa. If you've heard recordings of Ernest Hemingway's actual speaking voice, I know you'll agree.) 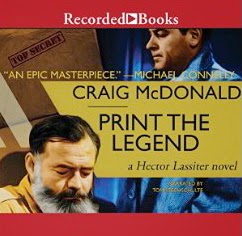 A few years back, I interviewed Tom about his career and voicing Hector's world. You can read that interview right here.
Posted by Craig McDonald at 8:00 AM No comments: 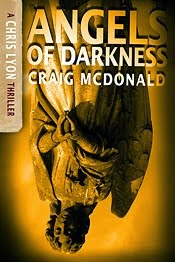 ANGELS OF DARKNESS, the concluding novel in a quartet of thrillers featuring Chris Lyon, is available until the end of the day, free, exclusively for Kindle. The novel also features Hector Lassiter in his eBook original debut, as well as introducing a new character who shares Hector's last name.

In addition to ANGELS, its prequels, CARNIVAL NOIR, and CABAL, are also available free for Kindle through the early morning hours of Monday.

ANGELS OF DARKNESS concludes the Chris Lyon story arc to date—one that begins with PARTS UNKNOWN, continues in the aforementioned CARNIVAL NOIR, and on through CABAL.

"Stretching from the Scottish Highlands to snow-swept Chicago, ANGELS OF DARKNESS is the fourth and final novel in the 'Dark Cabal Quartet,' an audacious, breakneck saga of serial murder and secret history; a wildly original thriller about the efforts of two long-persecuted men caught in the crossfire not just to survive, but to turn the tables on both sides to devastating effect."
Posted by Craig McDonald at 9:00 AM No comments: