I've been doing a lot of interviews with newspapers and radio stations in Mexico recently in support of the Spanish language release of HEAD GAMES (LA CABEZA DE PANCHO VILLA) there.

Here is the translation of one of those exchanges, with a couple more to follow over the next day or two: 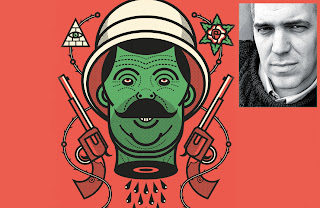 Q) Why the figure of Pancho Villa?

A) I knew a couple of old men in my hometown who rode into Mexico behind General “Black” Jack Pershing, chasing Villa after the attack on Columbus, New Mexico in 1916. That led me to novels about Villa, which in turn led me to biographies and histories about the man. Villa’s personal story and his idealism speak to me, and he’s one of those larger-than-life, very masculine figures who appeals to me as a character study, much like Ernest Hemingway, to name another “character” who figures in much of my fiction.

Q) How much fiction and how much of reality is in your novel?

A) A surprising amount of the novel is rooted in history. Most all the material about Villa, with the exception of the treasure map attached to his stolen head, is rooted in the historical record. The material about Skull and Bones—the secret society believed to have engineered the theft of Villa’s head as depicted in my novel—is also based on some fairly convincing documentation. Emil Holmdahl, a character in the novel, was actually arrested for raiding Villa’s grave. George W. Bush’s family has repeatedly been linked to the theft of Villa’s head, as well as that of Geronimo, and it became a campaign issue for his father, George H.W. Bush.

Q) "La Cabeza de Pancho Villa" — can it be considered a historical novel?

A) I believe it is an historical novel. I try to look for voids in the historical record and insert my fiction into those cavities while not violating the history too much if I can. In the end, I’ll bend fact to further fiction, but I rarely find myself doing that in my Villa book, or its three historically-grounded sequels featuring narrator, Hector Lassiter, known as, “The man who lives what he writes and writes what he lives.”

Q) Cinema is a very important element in your book, why?

A) The protagonist/narrator, Hector, is a man noted for drawing on his life for his fiction, in a manner similar to Hemingway, who appears in the three novels that follow “La Cabeza de Pancho Villa”. Hector is also a screenwriter who is friends with such legendary movie directors as Orson Welles, another character in the novel. At the end of the day, one of the themes of this novel is that of legend and myth and also of being a man. Our attitudes toward those topics, particularly when it comes to noted figures like Villa, are unfortunately too often shaped by cinema, which in the case of Villa, has not been very kind in terms of casting or Villa’s reputation.

Q) How has the American public received your book?

A) The novel was my American debut, and was nominated for the Edgar Award, the highest honor in American crime fiction, as well as several other key awards. There was some early movie interest but nothing has come together yet. It has gone on to be translated into French, Russian and Japanese, as well as Spanish, among other languages. At this writing, an artist in Austin, Texas, is finishing up artwork for a graphic novel of the book from a script I wrote. The main character of Mr. Lassiter has gone on to appear in three sequels, all of which have also been translated in many languages. Four more are yet to be printed. I wrote all eight Lassiter novels before the Villa book appeared, doing so with the notion of having a fully integrated and executed series with a beginning, a middle and an end.
Posted by Craig McDonald at 9:36 AM