SURREALIST ART AND MURDER IN OUR TIME? 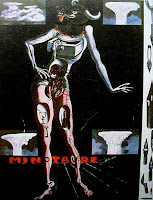 About a year ago (in my pre-official blog site days), I put together a post regarding the second novel in the Hector Lassiter series, Toros & Torsos, and the fact it spins on the premise that surrealist art and aesthetic theory may have informed or inspired several bloody, unsolved crimes of the 20th Century — most notably the murder of Elizabeth Short, the so-called “Black Dahlia,” as she was dubbed by panting L.A. journalists circa January 1947.

Further research in that area uncovered allegations of jaw-dropping reports of Spanish torture chambers designed and constructed to surrealist aesthetics — a sort of crazy cross between Escher and Abu Ghraib.

Life imitating art…art imitating death, and for some, it seems, it wasn’t truly art until somebody died.

Well, that was then. I posited my killer surrealists operating in the period between 1935-1959.

Late last year, Woody Haut, author of the excellent crime fiction studies Pulp Culture and Neon Noir, among others, very kindly reviewed Toros & Torsos. In passing, he noted, “And don't think surrealist murders are simply the stuff of urban legend. In the part of the world where I'm currently living, near Perpignan, there were a handful of such murders a few years back, the corpses of which supposedly replicated paintings by Dali.”

Over the holidays, I finally had a few minutes to follow up on that intriguing aside of Mr. Haut’s. I found this article from The Guardian regarding those Dali-esque crimes…

Occasionally, you find yourself the subject of these remarks about the plots of your novels turning on an “outrageous” or “absurd” premise, or you get the left-handed compliment that your novel works despite its “far-out concept” that surrealist art might inspire serial murder.

For more on the contemporary “Dali” case, you can check out the full (and very graphic) account of the crimes in the Guardian here.
Posted by Craig McDonald at 9:18 PM