PLAYING ONE TRUE SENTENCE, ROUND #2 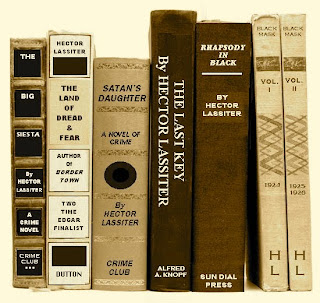 Wednesday night, we kicked off the second round of a new game to celebrate the release of ONE TRUE SENTENCE, the fourth Hector Lassiter novel. (We'll be playing from about 8-9 p.m. EST on Thursday, Feb. 17).

Every night, I start a true sentence on Twitter (@HectorLassiter, hash tag #1TS), and all takers finish that sentence.

Each Sunday, I pick the best sentence of the week and award the winner with a rare copy of the TOROS & TORSOS limited edition.

Round two found some answers taking a decided turn for the blue, and, mysteriously, the second appearance in as many nights of some gardening implements.

Here are the results of Round Two:

Only two things can truly kill a person…

...and believe me, I'm working on number three. (@BlackIrishBlarn)

...and it was my luck to meet up with both of them on the same day. (@hilarydavidson)

...and those fuckers that left me here sure as shit ain't it. (@brianlindenmuth)

...so I used the third thing and make him live with what I did to him. (@popculturenerd)

...and luckily, I am proficient at both. (@LolosLetters)

...and both, surprisingly, involve an old 45 by the Greg Kihn band. (@DocNoir)

...a twenty hour erection and a jealous bastard with some gardening shears. (@DocNoir)

...I survived the first but was about to meet the second. (@erinfaye)

...absence or too much-- the classic old man/young punk dichotomy I fruitlessly tried to avoid on my final day. (@wampusreynolds)

...a knife planted in your heart or a hot smoking round of lead to the face. (@matthewjmcbride)

Check in @HectorLassiter for your chance to play...
Posted by Craig McDonald at 8:41 PM