PLAYING ONE TRUE SENTENCE, ROUND #4 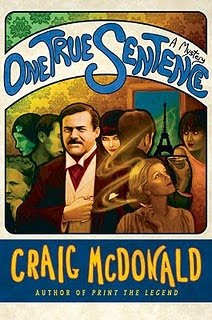 The fourth round of the new game to celebrate the release of ONE TRUE SENTENCE, the fourth Hector Lassiter novel, produced some of the cleverest comments, yet.

Each Sunday, I pick the best sentence of the week and award the winner with a rare copy of the TOROS & TORSOS limited edition.

Here's a sampling of results from Round four (my apologies to those that got by me because no hash tag was used).

On Sunday, Jon saw his own face on a milk carton; on Monday...

...he got plastic surgery. @LolosLetters

...he was joined there by the only person he loved. @erinfaye

...he couldn't see anything at all. @xesands

...it was on the evening news: "Man wanted: considered armed and dangerous. @jennsbookshelf

...he tossed the hair clippings & Loreal box in the trash as he drove away. @jenforbus

...he saw it on the billboard outside of town. @thedeMentedmom

...he saw a more recent photo of himself at the post office. @nj713

...he snatched his daughter from the playground and ran. @JHammons

...he finally started to accept that his brother was dead. @brianlindenmuth

...he killed the man who had put him there. @erinfaye

...he found out the wrong people were looking for him. @wampusreynolds

...he ran away from the cult that had always been home. @scarletncream

...the milk expired, as did ill-fated Jon. @shelfmagazine

...he left the house burning behind him. @romyk

...he demanded that his parent's tell him the truth. @thedeMentedmom

...he drank from the carton, tossed it, and untied the girl from the bedpost. @picky_girl

...he drove all night, kicked his dad's door down, and climbed the stairs.@picky_girl

...he switched to 2% milk because his face looked thinner on the carton. @jpjacquet

...he woke early and stood staring in the mirror, just to be sure. @spitballarmy

...he switched to a different brand that didn't use such shiny cartons. @WRNaturalist

...his mutilated body was found stuffed in a dumpster behind the Taco Shack. @usedguys

...he saw it wasn't his face at all, but the face of the man who was already dead. @matthewjmcbride

...he woke up from his coma. @popculturenerd

...he discovered that the dairy didn’t offer wallet-sized. @wolfeislander

...he phoned the dairy and told his ex-wife to knock it off. @wolfeislander

...he saw Jesus' face there. @graham_powell

...he woke to find himself chained to his bed post. @bushdog51

...he shot his surgeon so no one could link his new face with his old one. @hilarydavidson

...he was past his “best before” date. @wolfeislander

...he realized that yes, that was right. @AdamDetritus
Posted by Craig McDonald at 8:48 PM