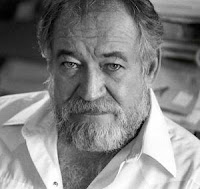 (Author’s note: Rogue Males: Conversations & Confrontations About the Writing Life, is my second collection of author interviews. This one includes James Ellroy, Pete Dexter, Daniel Woodrell, Elmore Leonard and the late, great James Crumley. Rogue Males also features an account of a trip to the desert to interview crime fiction greats Ken Bruen and James Sallis about the craft of writing. During the next few weeks, I’ll be sharing a little background about each writer featured in Rogue Males.)

Setting aside the wonderful and sublime Lew Griffin series, for me, there are precisely three great private eye novels.

I’ve never really cared for — or bought into — the whole licensed private eye thing. Probably my favorite non-print spin on the concept was The Rockford Files, which did such a sly and devastating job of mocking the P.I. tropes and clichés.

That said, there are those three special novels:

Hammett’s The Maltese Falcon is undeniable, particularly as it got the whole dubious ball rolling. Second, there’s Chandler’s The Long Goodbye, which nearly makes up for all the damage old Ray did in terms of inspiring far too many writers to the notion they could and should perpetrate their own series of simile-laden, private eye series populated by “tarnished knights” and “mean streets”…Marlowe knock-offs who seem to favor surnames lifted from English poets too dead to sue for damages.

And then there is James Crumley’s The Last Good Kiss — the last great private eye novel. Crumley drove the P.I. novel home, parked it, then broke the key off in the ignition switch. The world didn’t really require another private eye after J.C. put his idiosyncratic spin on the sub-genre.

The opening paragraph of Kiss is justly famous and was widely quoted when James passed away on Sept. 17, 2008:

“When I finally caught up with Abraham Trahearne, he was drinking beer with an alcoholic bulldog named Fireball Roberts in a ramshackle joint just outside of Sonora, California, drinking the heart right out of a fine spring afternoon.”

Many have made the case The Last Good Kiss is Crumley’s spin on The Long Goodbye; you can make an equally strong argument that Crumley’s The Wrong Case is his take on Chandler’s The Little Sister.

But Crumley’s world, and his way with words, is distinctly his own.

My interview with James Crumley was one of the last he gave. He was just coming off a health scare and enjoying the release of The Right Madness.

If you don’t know Crumley, learn a little more in this profile. Check out Eddie Muller’s tribute to JC — probably the best of the pieces written upon James’ passing.

Then pour yourself a few fingers of bourbon. Crank up Steve Earle’s “Copper Head Road” — a Crumley favorite. Settle in with The Last Good Kiss.

James Crumley interview excerpt: “I've been working on it off and on since, jeez, since I finished my first novel…’69? 1968? Somewhere in there. It’s a Texas novel. It’s very difficult for me to write about Texas. I have had numerous attempts. That was the second time I’d burned all the pages…not all the pages…not 800 pages in a line, but it was a lot of work. The unfortunate thing is I remember every goddamn word. I hate that.”

NEXT UP: JAMES ELLROY
Posted by Craig McDonald at 3:27 PM