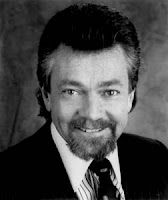 (Author’s note: Rogue Males: Conversations & Confrontations About the Writing Life, is a collection of author interviews. It includes Elmore Leonard, Lee Child, Pete Dexter, James Ellroy, Daniel Woodrell, Kinky Friedman and James Crumley. Rogue Males also features an account of a trip to the desert to interview crime fiction greats Ken Bruen and James Sallis about the craft of writing. During the next few weeks, I’m sharing a little bit about each of the 16 writers featured in Rogue Males.)

Stephen J. Cannell first entered my world, as a name, in 1974, when at age 12, I tuned in one Friday night to catch James Garner in this new TV series called The Rockford Files.

The episode was titled, “Tall Woman in Red Wagon” and found P.I. Rockford hired by a small town journalist to look for her “stunning,” statuesque friend, a gone-missing co-worker. It was quintessential Rockford, opening with a grave robbery and finding Garner masquerading as sundry professionals — false identities bolstered by bogus business cards printed on a nifty little press Jim kept stashed in ’74 Pontiac Firebird (license # 853 OKG…the things we remember…).

The episode was scripted by Stephen J. Cannell and hooked me on Rockford.

Turns out, I already knew Cannell’s work: an earlier series he was tied to, Adam-12, was destination viewing in the McDonald household during those days of three network channels and one PBS affiliate.

I began to track Cannell’s work, following him through the brief run of Richie Brokelman, to Tenspeed and Brown Shoe. (In the latter, in an odd, premonitory inside joke, Jeff Goldblum’s character read detective novels penned by an author embodied by a dust jacket photo of future thriller novelist Stephen J. Cannell.)

In the Rogue Males interview, in addition to talking about his own novels, Cannell also discusses his television career, working with James Garner, and, at some length, the art of storytelling and his experiences adapting his own novels for the screen.

Stephen J. Cannell interview excerpt (on writing for Adam-12): “When I got there I decided, ‘You know what I’m going to try and do with these comedy bits, if I can?’ — almost like in a writing class, where you’d come on a character in page 7 and you’d be out of the character on page 8 or 9. But that character had to exist during those three pages or four pages and be funny and at the same time, real. I sort of developed this technique of saying, ‘Every character has to have a yesterday and is going to have a tomorrow.’”

NEXT UP: MAX ALLAN COLLINS
Posted by Craig McDonald at 4:11 PM