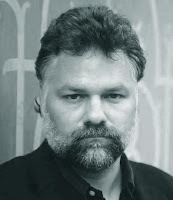 (Author’s note: Rogue Males: Conversations & Confrontations About the Writing Life, is a collection of author interviews. It includes Pete Dexter, Alistair MacLeod, Daniel Woodrell, Elmore Leonard and James Crumley. Rogue Males also features an account of a trip to the desert to interview crime fiction greats Ken Bruen and James Sallis about the craft of writing. During the next few weeks, I’ll be sharing a little background about each writer featured in Rogue Males.)

I first heard of Craig Holden at a James Ellroy signing in Ann Arbor, Michigan several years ago. Holden was in the audience that rather cold night and Ellroy took the trouble to tout Holden’s most recent novel — it was a rare and ringing endorsement on the part of the Demon Dog.

I secured a copy of Four Corners of Night (1999) and was pole-armed. Set in a mythical city in northwestern Ohio — a kind of re-imagined and combined Toledo/Detroit — the novel turns on the uneasy axis of two cops and the woman who stands uneasily between them. It’s a classic triangular dynamic that informs everything from Bruce Springsteen’s noirish “Highway Patrolman,” to James Ellroy’s own watershed novel, The Black Dahlia.

The language sparkles from its richly evocative opening in an all too-real Denny’s along the Ohio-Michigan border (“‘Buck ninety-nine,’ Bank says. ‘Who can afford not to eat this shit at that price?’ He’s said this over the years maybe fifty times in this restaurant with me.”), to wonderfully evocative lines that touch poetry (“We have no business at this scene…standing in the river of some mother’s grief and feeling my own worthlessness.”).

Four Corners' exploration of the ramifications of a child’s abduction shows that in the right hands, a novel centered around a crime can be both a page-turner, and an atmosphere-rich and wrenching character study.

Whenever the words won’t come — or if they come too easily — Four Corners of Night is one of the two or three books I consistently dip into for inspiration or humbling.

Craig Holden interview excerpt: “The first one I wrote might have had some mystery element to it, but that’s the closest I’ve ever come. Four Corners had a mystery element, but it’s not a mystery. As far as genre goes, that’s not what I do. I don’t even think of them as crime novels or thrillers. I don’t think this book (The Narcissist’s Daughter) is a thriller. I know it’s being marketed as a thriller, but I don’t think it is a thriller. Not to me it isn’t.”

NEXT UP: ALISTAIR MACLEOD
Posted by Craig McDonald at 3:46 PM